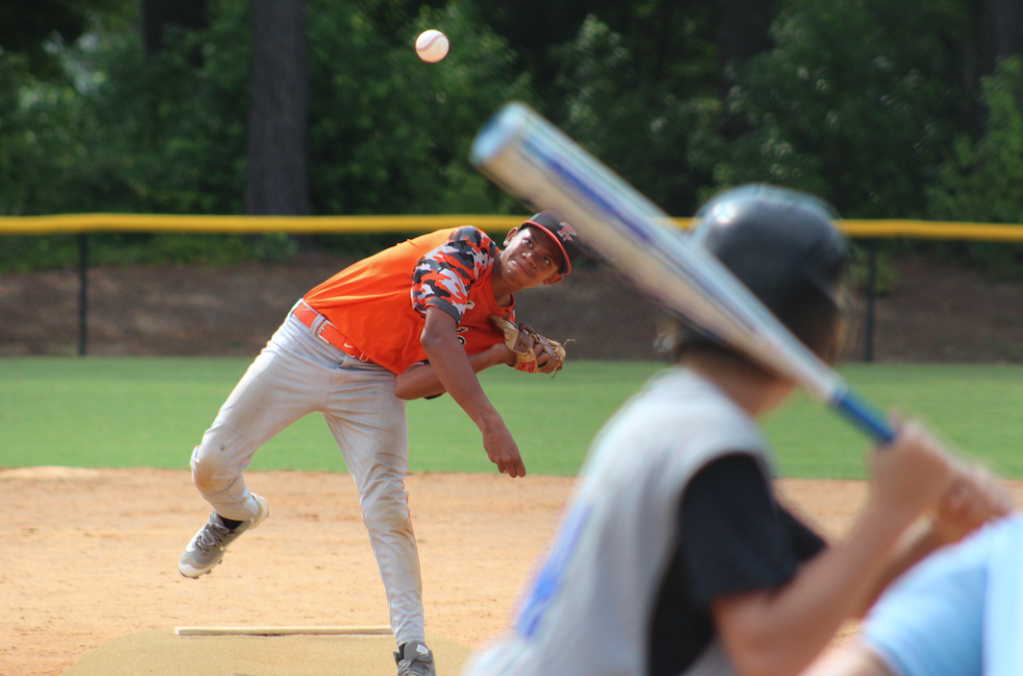 WENDY RAPOLE Triple Threat travel team pitcher Michael Dailey watches his throw during his team’s 5-0 run in the Oxford Summer Blast tournament July 30-31 in North Carolina. In addition to his play on the mound, he hit four home runs during the tourney.

The Triple Threat travel baseball team ended its run at the 12-and-under level with an exclamation point.

The squad, which includes players from Prince Edward County, Charlotte County and Crewe, went to North Carolina for a tournament July 30-31 and swept the competition at the Oxford Summer Blast, organized by NCGameOnSports.com.

Playing with eight other teams in the Amateur Athletic Union tourney, Triple Threat went 5-0, winning the championship game 14-0 against the VH Angels from Burlington, N.C.

The Triple Threat boys were prolific hitters on offense, producing 15 home runs across the two days.

Additionally, “the whole team, overall, played great defense,” Coach Mark Simon said. “Even if they would have just hit mediocre, we would have still won all the games because our defense was lights out.”

But lending their bats to the extraordinary offensive output was Michael Dailey with four homers; Tanner Thomas with four homers; Nate Reed with three and Rhodes Cooper, Tya Johnson, Triston Long and Jake Simon with one apiece.

During the tourney, “Nate Reed pitched eight and two-thirds innings and gave up one run; Michael Dailey pitched seven innings, gave up two runs, and that was our two main pitching performances,” Coach Simon said.

Reed had two pitching wins and a save.

The only tough game Triple Threat had was in the contest prior to the championship game when it faced a team from Madison Heights.

This was the last weekend of Triple Threat’s eligibility as a 12U team, as it became a 13U squad as of Aug. 1. With the move up comes the adjustment to a regulation size field.

“It’s a big jump for the kids, so they wanted to squeeze in one last tournament on the small field,” Simon said. “They won’t be hitting 15 home runs a tournament now, I can tell you that.”

He does expect them to continue to succeed, however, as they are a highly ranked travel team in the AA classification.

“I’m fairly sure we’re going to be moved up to a AAA team here pretty soon,” Simon said, adding that rankings are determined based on different factors like strength of schedule and record.

The main season is about to begin for Triple Threat in the fall.

“We’re going to practice for about three more weeks, and then we’re going to get started with a full schedule,” Simon said.

All of the boys on the team have aged out of Dixie Youth Baseball, “so as soon as school ball’s over, we’ll play a full spring and summer schedule for travel ball next year,” Simon said.

The coach said he has gotten phone calls from people from bigger areas like Richmond, Lynchburg and Charlottesville asking if Triple Threat is going to hold a tryout, but he has said no, intending to keep the team for young players from the more rural area.

“We put together this team of really good players from this rural area, and then we can go in and we can compete and most of the time win against these teams from the bigger cities, so we’re kind of proud of that,” Simon said.