The Canada Lily: a striking native 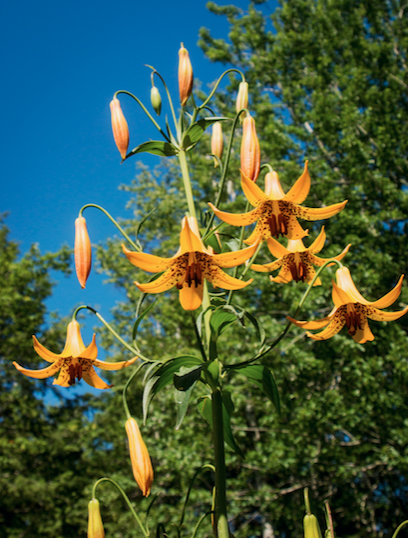 The pyramidal arrangement of the Canada Lily’s blooms makes it look like a fantastical woodland chandelier.

Brave the heat for a walk in a moist meadow or along the edge of a wooded area and you just might find a Canada lily (Lilium canadense). They’re probably the most common and the most widely distributed native lily in North American. They can be found from Quebec south to Alabama. The Canada lily was first seen by French explorers in the early 1600s and eventually named by Linnaeus in 1753. It’s an incredibly showy lily and was taken to Europe in the 1600s where it has since been successfully grown in England and France.

Early Virginia gardeners also appreciated the beauty of the Canada lily. Lady Jean Skipwith grew it in her gardens at Prestwould Plantation near Clarksville. Thomas Jefferson was also a devotee of this plant and helped introduce it to fellow gardeners. While he was in France, he wrote to John Bartram, the famous Philadelphia plantsman, and requested several plants. He also purchased seeds from James Lee & Co. in England and gave them to a friend in France.

The Canada lily is striking because of its height and the number of blooms. A typical specimen is generally 2 to 4 feet tall and can have as many as 15 to 20 large blooms arranged in a pyramid shape on a single upright spike. A Canada lily looks a bit like a flamboyant floral chandelier. Encounter a cluster of them growing in the wild and you’ll just have to smile. The yellow to orangish yellow blooms are pendant — facing downward — and bell shaped. Sometimes the blooms have maroon spots on the inside. They’re not fragrant, but so showy fragrance would seem superfluous. This lily has six to 10 whorls of leaves on its stem. Each whorl has three to 12 leaves. The leaves are smooth, long, and narrow and often droop at the tip.

As early Virginian gardeners and European plant enthusiast knew, the Canada lily is a beautiful addition to the garden. Chanticleer Gardens in Pennsylvania uses it to great effect at the back of mixed borders with cardinal flower, Joe Pye weed and many other tall perennials. You’ll find that it’s equally attractive in your home garden. Just provide this lily with partial shade and rich, moist, slightly acidic soil. As might be expected it grows particularly well when interplanted with rhododendrons and azaleas. The Canada lily is easy to grow from bulbs, but can also be propagated from seeds; the process just takes a bit longer.

In addition to being attractive, the Canada lily is also a butterfly magnet. Both the great spangled fritillary and various swallowtail butterflies feed on its nectar, while halictid bees collect its pollen.

If I’m very lucky this year, I’ll find Canada lilies in both Virginia and Maine, a double delight for the dog days of summer.