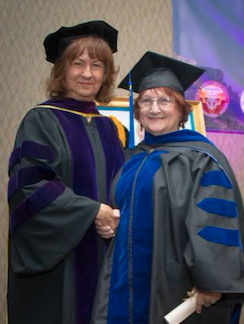 The Rev. Dr. Sakina Geraldine Sawtelle,  recently returned from Sedona, Ariz., where she attended her graduation from the University of Sedona and received her second doctoral degree in Theocentric Psychology, PsyThD.

Sawtelle received her first doctoral degree, in Metaphysics, from the University of Metaphysics in 2003. At that time she established the Central Virginia Metaphysical Center in Buckingham.

Sakina is the artistic director of the Sawtelle School of Performing Arts and Awareness and the founder and ministerial director of the Central Virginia Metaphysical Center. She is an intuitive, Reiki master teacher and a counselor in psychological and spiritual matters.

She said her goal is to help individuals to live healthier and stress-free lives.