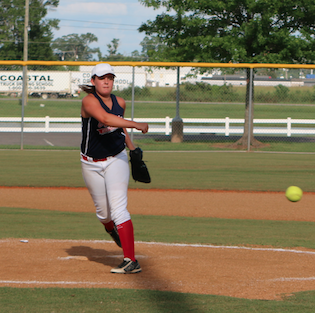 After losing to the host team in their first game Sunday morning, the PEFYA Debs, who represented Virginia, took on Florida in the evening. They scored five runs in the fifth inning to take a 5-4 lead but ultimately fell 6-5, eliminating them from the tourney.

“I think they showed their resilience today coming back in the second game with playing as hard as they did,” PEFYA Manager Michael Roach said. “They played really well as a team. They supported each other. It’s great to see how they play together. They are a really good team.”

They became the first PEFYA Debs squad to win a state championship and advance to the World Series.

Reflecting on the contest against Florida, Roach said, “It was just a close game between two good teams.”

Florida led 4-0 after four innings, but then the PEFYA Debs began to get significant results on offense in the fifth.

“Abby Roach started off with a single to get that inning going, and we just kind of picked it up from there,” Manager Roach said. “We had nine hits in that inning.”

Hodges tripled during the offensive burst, driving in three runs. She went 2-for-4 for the game, while Alexa Marzloff was 2-for-3, as was Mary Grace Amos.

Manager Roach said the team “played much better in this game than they did this morning. They came out and had a little more confidence, I believe, and came ready to play.”

The squad featured the same rotation in the circle in both games, with Hannah-Gray Schmidt getting the start, later being relieved by Jaden Capati.

In the loss to Alexandria, the PEFYA Debs were plagued by errors.

“We started off, I guess, with a case of the nerves,” Roach said.

PEFYA had the lone first-round bye in the tournament, not having to play Saturday. Roach said Alexandria had gotten the nerves out of its system Saturday when it defeated Alabama 16-6, but he nevertheless gave credit to Alexandria for a job well done against his team.

“The other team played solid,” he said. “They played good defensively. We hit the ball some, and the other team made some really good plays.”

“We were three up, three down the first three innings,” Roach said. “We scored one in the fourth with three hits and a couple of walks.”

Neither team scored in the fifth, but in the sixth, Alexandria got its last two runs, and PEFYA produced its other run, benefiting from three hits, which gave it six for the game.

Hodges and Moreland each went 2-for-3 at the plate.

“Alexis Gayles and Caroline both had nice hits that were robbed by a great defensive play,” Roach said.

He estimated Alexandria finished with 14-15 hits.

Roach affirmed that his team settled down a little bit as the game went on but said he thought PEFYA’s performance was influenced by several things, including the early morning, the long trip to Louisiana and jitters due to playing on a big stage.

The PEFYA Debs elevated their game in the evening, though, showing the mettle that helped them go 5-0 in the state tournament.

Unlike some of the teams in the World Series, PEFYA was not an all-star squad assembled from a large pool of talent populating various regular season teams.

“During the regular season, we just had the 12 girls,” Roach said. “It’s really amazing what they’ve accomplished, it really is, coming from such a small area, playing against states that play softball year-round (and) have the opportunity that we don’t have because the weather and things like that.”

Additionally, though he had not confirmed it, Roach said that among the teams in the World Series, “I’m pretty sure we were the youngest, by far.”

“We played some older teams, and that’s another great thing about this team, being as young as they are, being able to compete with these older girls,” Roach said.