Montgomery is back on track 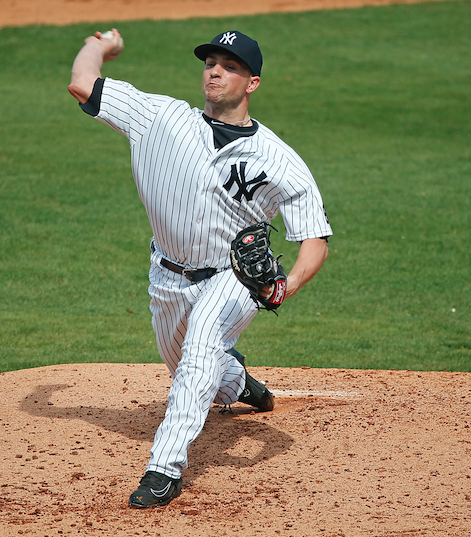 MIKE KROPF | LONGWOOD UNIVERSITY Former Longwood University pitcher Mark Montgomery participates in spring training as part of the New York Yankees organization. After recovering from a shoulder injury, the minor league standout appears poised to resume pursuit of his goal to pitch in the Major Leagues.

Mark Montgomery is looking like himself again on the mound in the minor league levels of the New York Yankees organization.

The former Longwood University standout closer has emerged from a challenging stretch of his professional career that followed a sharp ascent from 2011, when he was drafted in the 11th round, to 2013, when he was given the Kevin Lawn Award as the Yankees’ minor league Pitcher of the Year.

“He barnstormed through all the lower levels of the Yankee organization,” said Montgomery’s former head coach at Longwood, Charles Buddy Bolding.

Bolding said Montgomery, who has been playing as a reliever, was on the cusp of reaching the Major Leagues, but then it did not happen.

A setback came in 2013 in the form of shoulder bursitis, which Montgomery said “locked everything up.”

“Basically, it’s just inflammation in the shoulder joint, so there’s no structural damage, obviously, which is great, but it just kind of set me back,” he said. “And unfortunately, with that kind of injury, you kind of just have to wait for the inflammation to go away, so you kind of have to let it run its course.”

Generally, Montgomery throws anywhere from 90 to 94 miles per hour.

That is a significant drop at the professional level, and it helped put Montgomery’s seemingly unstoppable march to the Major Leagues on hold.

“Last year at the end of the year, everything kind of got back to where it was,” Montgomery said. “So, I’m healthy, knock on wood.”

He was recently on the seven-day disabled list (DL), due to back spasms that have now subsided.

“Arm-wise, everything’s been great,” he said. “Fastball and slider are back to where they should be. … This year, the velocity is as high as it’s ever been.”

Montgomery is in his sixth year as a professional player and is encouraged to see new highs in his game, not just a return to form.

In 22.1 innings pitched across 17 games played with the Scranton/Wilkes-Barre RailRiders, the Yankees’ Triple-A affiliate, Montgomery has a 2.82 earned run average, two saves in three opportunities, has thrown 30 strikeouts and he is 1-0.

As he puts his major setback behind him, Montgomery said he learned something important from it.

“I think the injury taught me that you can’t really go through baseball without being humbled at some point and kind of learning that you’re going to have setbacks and how to work through them and kind of just continue to keep working and stay positive,” he said.

Montgomery has made it a habit not to miss out on the lessons to be learned from different people and places along the way.

“Going to Longwood was massive for me,” he said. “I grew up a lot in my three years there, and I think that played a huge part in preparing me for professional baseball.”

Bolding said he contributed to Montgomery’s development by recognizing his strengths early on.

During his time in the Yankees organization, Montgomery has been part of four different Major League spring trainings and had the opportunity to pick the brains of all-time greats like Derek Jeter and Mariano Rivera.

“Just being able to talk to those guys and (learn) what they went through and what works for them, they kind of help mold you and show you the way,” he said.

He is currently on the roster for the Trenton Thunder, the Yankees’ Double-A affiliate, giving him an opportunity to get some innings in after coming off the DL while also making room for two players who came down to Scranton from the Yankees. He hopes to climb back up the ladder soon.