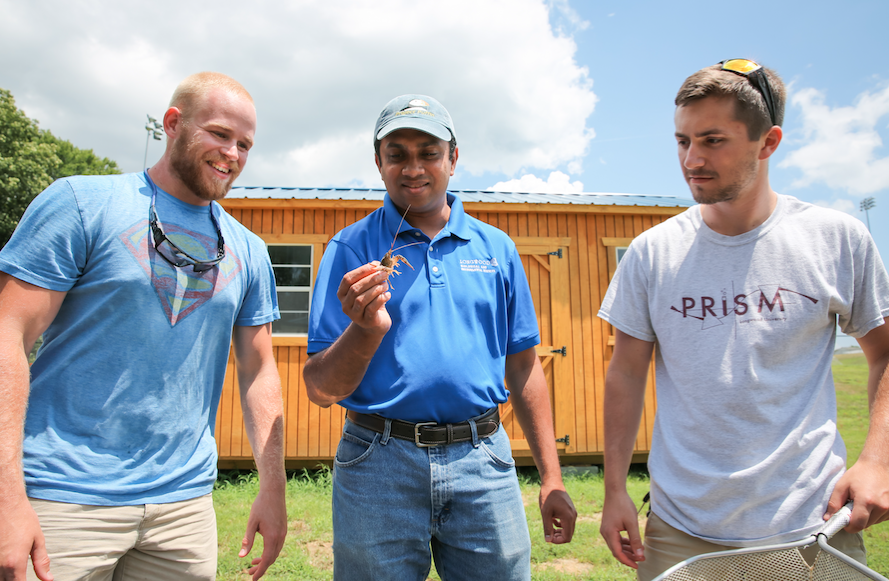 If someone had told David Conner, ’17, and Connor Perry, ’19, that they could spend a summer fishing — and get paid for it and boost their job skills — they might have thought it was a college offer too good to be true.

They would have been wrong.

According to a Longwood University press release, the two biology majors have spent two or three days a week this summer catching crayfish in area creeks as part of a research initiative to create a critically needed survey of native and invasive species — and how they interact with each other.

“Catching crayfish is fun. Basically, what we’re doing is fishing,” said Perry, of Montclair, who along with Conner, of Powhatan, has been gathering data about populations of crayfish living in the Appomattox River basin.

The project is part of the PRISM program, which provides Longwood students with hands-on research experience, housing and a stipend.

After catching the crayfish, Perry and Conner identify and catalog them in a lab in Chichester. Their survey, which eventually will include crayfish from more than 40 sites in the western headwaters of the Appomattox basin, will be compiled into a database they’ll share with state conservation officials.

“We find a lot of them under leaf litter and rocks, around root masses and in crayfish burrows, which are holes they dig near creeks,” said Perry. “You have to stick your hand down into the hole until you reach water, sometimes about a foot down, which makes me a little nervous.” Crayfish don’t bite, but they can pinch with their claws. “David and I have been pinched a few times, which is an occupational hazard,” said Conner.

The budding biologists have gotten better both at catching and identifying the small, lobster-like crustaceans, found most commonly in the southeastern United States. “The easiest ones to identify,” said Perry, “are sexually active males, due to differences in genitalia among species. To ID females, you have to look at claws or other body parts.” The research also includes experiments measuring the effect on survival and body growth when native crayfish (in this case, Piedmont crayfish) and invasive crayfish (Virile crayfish, one of three invasive crayfish in Virginia) compete for food and shelter.

Similar experiments were conducted in a PRISM project last summer, led by Dr. Sujan Henkanaththegedara, assistant professor of biology. Nearly 50 percent of native crayfish are threatened with extinction, due to what researchers consider the aggressive nature and ecological superiority of invasive crayfish. Henkanaththegedara wants to know if invasives are as bad as is widely thought; last year’s research found that some but not all deserve their bad rap and these findings were just published in the Journal of Aquatic Invasions. He also is eager to learn more about the distribution of invasive crayfish.

“Even though the literature says the distribution of invasives is restricted in Virginia, we have found four new populations of red swamp crayfish (an invasive), which is not good news,” he said. “Data on crayfish is limited in Virginia, so an organized survey is desperately needed.”

Conner’s PRISM experience has reinforced his longtime desire to be a conservation biologist. “I want to study and work with animals. I want to be out in nature every day,” he said. Perry, who is in the ROTC program and plans to be a microbiologist in the Army’s medical corps, also has benefited. “This experience will make me a more well-rounded biologist. None of my friends at other schools has had a great undergraduate research experience like this,” he said.

At a Virginia Academy of Science (VAS) conference in May, Conner and Perry presented preliminary data from last year’s crayfish study. They will present results from both studies at another VAS conference and at a meeting of the Association of Southeastern Biologists. “They’re learning how to design and conduct experiments, how to statistically analyze data and how to write scientific papers,” said Henkanaththegedara. The professor praised the students’ work.

“Field work is tough to do, but both David and Connor are outstanding at it. Both know exactly what to do,” he said. “I’m lucky to have two really good students.”