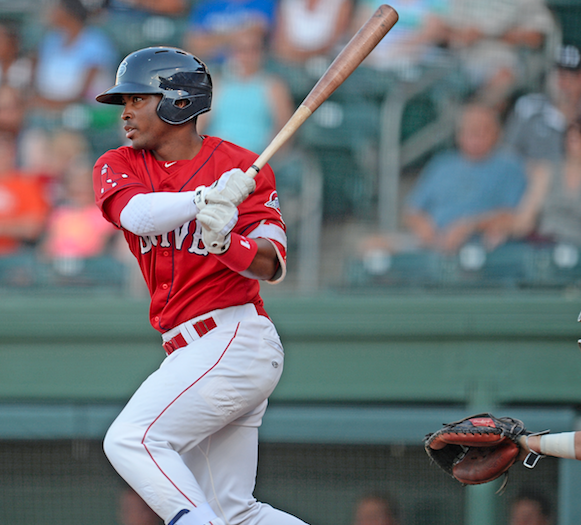 GWINN DAVIS Former Longwood University standout Kyri Washington tracks the result of his swing as he competes for the Greenville Drive, the Low Class-A affiliate of the Boston Red Sox.

The play of former Longwood University baseball standout Kyri Washington grabbed the attention this summer of officials in the Boston Red Sox organization.

Drafted by Boston in the 23rd round in 2015, Washington’s strong hitting in the minor leagues made him part of the organization’s listing of its top 30 prospects on MLB.com in July. He remained listed at No. 30 as of Wednesday.

Washington said he tries not to get wrapped up in what other people think of him but was excited to make the list.

“It was a great honor to see that happen, for sure,” he said. “I think that was just a testament to all my hard work paying off and something I take pride in.”

He is in his first year of full-season professional baseball and played 82 games for the Greenville Drive, Boston’s Low Class-A affiliate. During that time, he batted .258, leading his team in RBIs with 63.

He was fourth in the South Atlantic League in RBIs and slugging percentage (.477) and eighth in home runs (14).

“I felt I’ve done a good job, a lot better than my year went last year, for sure,” Washington said.

In 2015, he played for the Gulf Coast League Red Sox and also for Boston’s Class-A Short Season affiliate, the Lowell Spinners. In 35 games, he produced only one home run and his slugging percentage with either team did not rise above .388.

“I can’t really focus on the numbers too much because … that’s when you start to see yourself go downhill,” Washington said. “So, my main focus is just getting better every day, getting my work in and just progressing as a player and numbers will come eventually.”

And he has seen improvement in his game.

“I think I’ve gotten better defensively, for sure,” he said. On offense, “I worked on incorporating a new approach and trying to get ahead of counts and get fastballs to where you can do some damage with getting those power numbers up.”

His prep career included him playing for Fuqua School, Lynchburg Christian Academy and Grafton High School. He was the last recruit signed by Buddy Bolding, the legendary former head baseball coach at Longwood.

Bolding has been aware of Washington since the 22-year-old was a child attending his camps.

“He had tremendous motivation from the first moment I saw him, and I thought he had a chance when he was 8 years old to be a special baseball player,” Bolding said.

Washington’s physical development since then has supported that potential.

“He’s become very, very strong,” Bolding said. “He’s got great bat speed. He has great love for the game. He has great drive, the ability to grind out through the minor leagues. And so I’m hopeful that he will continue to develop and break that threshold of being able to hit .300-plus in a minor league uniform and advance up through the high levels of professional baseball and perhaps play in a Red Sox uniform someday in Fenway Park.”

Washington said he has found success as a professional by staying grounded.

“I think just keeping a level head definitely helps you stay the course,” he said. “Just do what you can and know yourself as a player and just stick to what you can do and not try to impress others or do what other people do.”

Simple and important lessons from college have proven vital, like having respect for the game and going about one’s business the right way.

“Playing the game the right way, I learned that at Longwood, and I think it’s helping me out down the road,” Washington said.