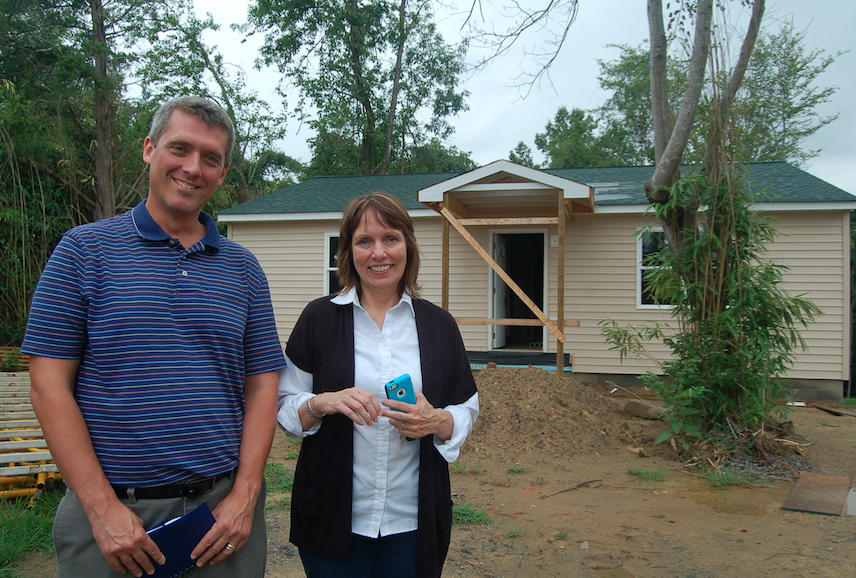 MARTIN L. CAHN | HERALD Sam Rabon and Jayne Johnson, of Farmville Area Habitat of Humanity, stand in front of the organization’s next home to be completed in Farmville. Johnson said volunteers hope to complete the house by September.

Johnson said the two-bed, one-bath construction will become a new home for a Prince Edward County Public Schools employee by the end of September. She and Rabon emphasized Habitat is not giving away the house.

“Each of our clients have to put sweat equity into their home,” Johnson said. “They have to go through home buyer education classes and they have to work on another Habitat home, preferably before theirs is done.”

“There is a mortgage,” Rabon added. “We’re constantly educating the public about that.”

As explained on Farmville Habitat’s website, potential clients are assessed on three criteria: need, ability to pay and a willingness to partner with Habitat. Applicants are considered if their present housing need is inadequate and if they are unable to obtain adequate housing through other means. “Inadequate housing” could mean there are structural problems or problems with water, electrical, sewage or heat.

Clients actually buy their new homes from Habitat and, therefore, must demonstrate an ability to pay, with reasonable credit history and without judgments, collections or large outstanding debts. Habitat will help determine if making the mortgage payment will hurt an applicant’s ability to pay their other bills.

In addition to the house under construction in Farmville, Habitat has cleared land for another new construction in Dillwyn. Johnson said crews should break ground in about 30 to 60 days and hope for completion in December.

Rabon became community outreach director in April thanks to a capacity building grant after already working for Habitat for about a year and a half. He said while the organization has built homes in Prince Edward and Buckingham counties, for example, it’s taken a slower approach in Cumberland and Charlotte counties.

“Cumberland High School students built that,” Rabon said, pointing out a shed in the future Andrew Drive home’s back yard, and referring to a project completed in early June. “We are trying to make more of a connection and hope to continue this ongoing, important story.”

Each county, he explained, has a Habitat committee.

“We are just getting started in Charlotte County,” Rabon said.

In February, Farmville Habitat signed an agreement with the Charlotte County Partnership. Rabon said the agreement led to an expansion of Habitat’s “Brush of Kindness” exterior home preservation program.

“We’re easing into it,” Rabon said of the relationship with Charlotte County.

To learn more about Farmville Area Habitat for Humanity, the opportunities to own a home or volunteer to build one, visit www.farmvillehabitat.org or call (434) 394-3001.