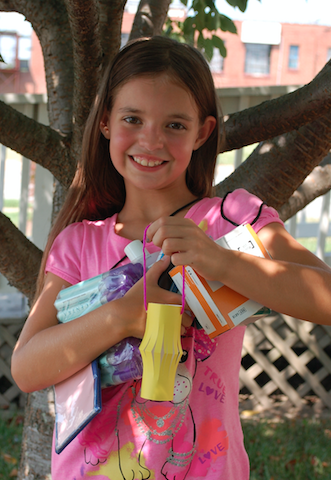 JORDAN MILES | HERALD Nine-year-old Olivia Fortune, of Buckingham, embraces with some of the medical supplies donated by Centra Southside Community Hospital in Farmville.

It all started when she was watching TV in her living room.

Fortune said watching the show — centered on two girls who sell origami butterflies to bring clean water to communities across the world — “inspired me to do something.”

She said she thought about her neighbors, Bruce and Jill Falls, who volunteer regularly at the Blue Ridge Area Food Bank at Crystal Cathedral in Dillwyn on specific Fridays. Then, she came up with the idea of giving away medical supplies to the food bank’s recipients.

“The goal is to get (about) 200 first aid kits to give out at the Crystal Cathedral Food Bank,” Fortune said when asked about the goal of her project. “Our neighbors work there (and) volunteer there.”

One of her largest donations came from Centra Southside Community Hospital in Farmville, which donated many needed items, including hand sanitizer, bandaids, peroxide, gloves and gauze.

“We’ve got some supplies,” her mother, Pam, an attorney at the Farmville-based Virginia Legal Aid Society, added.

“We’re hoping to get another donation from UVa (Medical Center) because I was born there,” Olivia said.

One fundraising effort comes from selling small chinese lanterns for $1 each.

“We’re hoping to get some of my closest friends into it,” Olivia said of packing the kits.

“And some people give and don’t take a lantern,” Olivia’s father, Todd, added.

Donation boxes are set up at Pinos Italian Restaurant in Dillwyn and at the Virginia Legal Aid Society on East Third Street across from the Farmville Post Office.

Olivia and her parents have received numerous compliments for the project.

Olivia says all she’s trying to do is follow the TV show, which includes people helping to make a difference in the world, and seeking to inspire others to do the same.

In Olivia’s case, the show is worth its weight in gold.

“The basics of what we’re looking for are bandaids, alcohol wipes, antibiotic ointment, bandages, hand sanitizer would be good … Aspirin would be good to have,” Todd said, adding cotton balls, Q-tips, gauze and other medical supplies are needed.

“Anything that people could use in an emergency who don’t have insurance,” Pam said of the needed supplies.

Pam said she couldn’t be prouder of her daughter.

“This is the most proud I’ve been of her of anything that she’s done or achieved, because she’s thinking about giving back to other people and she’s been totally into this,” Pam said.

Pam’s job requires her to work with many low-income people in the area, such as the ones who will soon receive first-aid kits in Dillwyn. Many are on fixed and limited incomes, she said.

“They have TANIF (Temporary Assistance for Needy Families) income. That doesn’t stretch very far. It’s like $200 or $300 a month,” Pam said. “And then they might have food stamps, but how do you pay your rent and everything else off of that amount of money and then have money leftover to buy medical supplies and things like that for your kids or yourself?”

Todd is also proud of his daughter.

“It seems like we’re in a day and age where kids are always thinking of me, me, me. It’s really nice to see what Olivia’s doing. She’s thinking about others,” he said.

Olivia’s distribution is set for Friday, Aug. 12. She said after the coming school year is over, she’s interested in another project for the community, or expanding the scope of this one.

“Next summer, we’re hoping to continue the project,” she said.

Pam said it could expand to Farmville.

“We wanted to take on Buckingham at first,” Pam said.

“I’m hoping to form a group of kids about my age, my friends, to help us do this,” Olivia said of expanding the project.