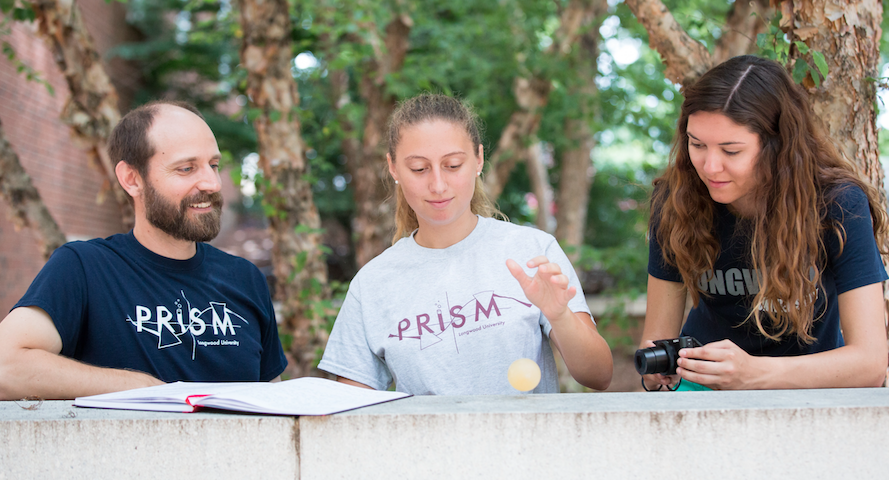 According to an LU press release, they’re smashing eggs; squishing Cheetos Puffs; soaking popcorn in water; and stretching Twizzlers, pretzels and pizza slices in a lab. Frivolous college hijinks? Nope — this is research, and what they’re doing may one day be part of the undergraduate physics curriculum.

Skelton and Dandridge are devising and conducting experiments in which they’re studying various properties and behaviors of common objects, many of them food items. They’re producing written and video materials with the goal of teaching and exploring the study of motion — called classical mechanics — in an interdisciplinary and engaging way.

“We’re coming up with fun, interactive labs and activities,” said Skelton, a physics major from Jetersville.

Many of the experiments involve objects falling or colliding with other objects. Skelton has been dropping variously cooked eggs — raw, boiled and soaked in vinegar for two or three days, which makes them rubbery — from different heights to study the eggs’ velocities and momentum, as well as whether the collisions are elastic or inelastic.

“Rubbery eggs are so much fun,” said Skelton, who has gone through two dozen eggs and has the “egg splatter” on her clothes to prove it. “They bounce when dropped from short distances but splatter at higher distances. It turns out the splatter from rubbery eggs flies farther than raw eggs, since rubbery eggs don’t have a hard outer shell, and part of the explosion is pushed upward during impact by the elasticity of the rubbery membrane. That surprised me more than anything else at first, but it makes sense.”

She also has become an expert on popcorn.

“We’re trying to see how long you have to soak popcorn in water so that it won’t pop,” said Skelton, who has popped and measured 90 individual kernels. “If it’s soaked in water for two hours, it will still pop but will produce smaller puffs. Too much moisture — and not enough — are not good for popping. Most kernels are 12-14 percent water.”

Dandridge, a physics major from Farmville, has come up with experiments involving maple seeds, Twizzlers, Cheetos puffs, pretzel sticks and other items.

“I’ve been learning applications for the concepts I already know, which is interesting,” she said. “Rebecca and I brainstorm and bounce ideas off each other. One of us will say, ‘Does this sound right?’ I’ll try things, and sometimes they don’t work, and I have to try other things. For example, when I was working with pretzels, I had to use duct tape and clamps, and wrap a string around them. I’ve had to be creative.”

Some of the experiments are being videotaped with a high-speed Sony digital camera at about 1,000 frames per second, which is yielding slow-motion videos to be posted on YouTube.

Skelton plans to research prosthetics after earning a physics degree from Longwood, then an engineering degree from Virginia Tech. Dandridge plans to study physics or engineering in graduate school.