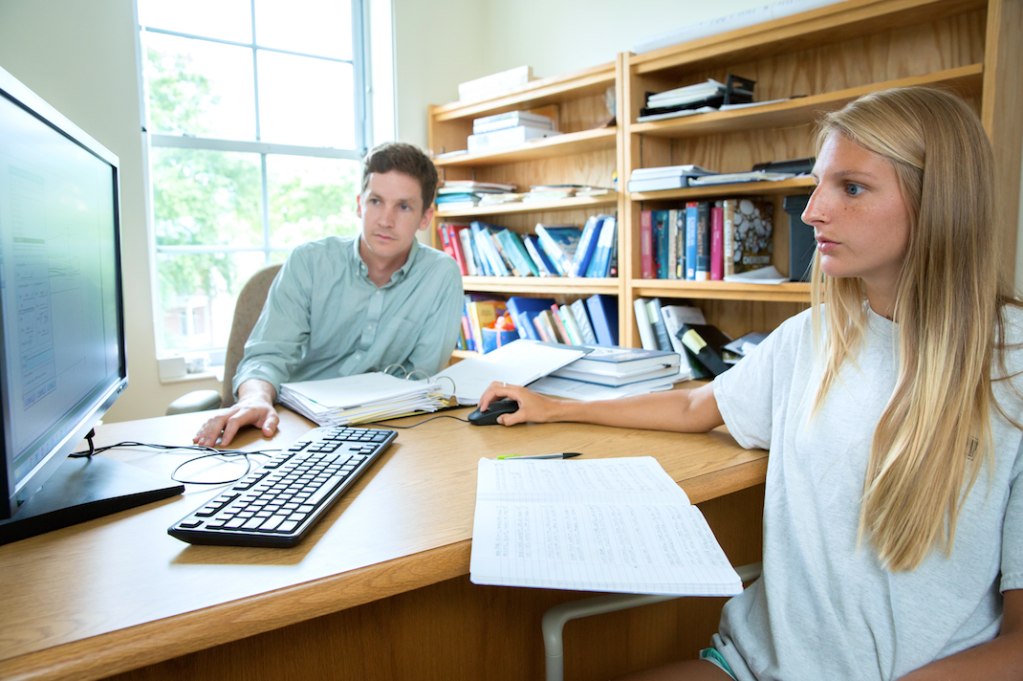 If it’s something to do with the impact of molecular structure on the performance of electronic devices, Longwood University (LU) student Jayden Metzger can probably tell you about it.

According to an LU press release, her research on molecular electronics — which could lead to faster, more powerful electronic devices — involves frequently inputting data on how a molecule’s atoms are arranged. Then she has to wait for calculations, which are done in a sophisticated computer program. Waiting for new numbers is the hard part.

“That could take anywhere from a half-hour to three days. You have to learn patience, and I’m not a patient person,” the chemistry major from Midlothian said, laughing.

Metzger’s research involves the use of single-molecule components for electronic devices.

“This is an emerging technology that is the next major step in electronics,” said her research director, Dr. Benjamin Topham, assistant professor of chemistry. “It’s important to be able to interpret the data and to spot potential trends, which Jayden is learning to do.”

As part of the PRISM program, Metzger, a rising senior, has learned how to analyze data once she receives it. Her examination of how slight variations in a molecule’s structure affect electronic performance focuses on a molecular switch, which she likened to a light switch. She wants to know which molecules work best to conduct or control the current.

“We need to know how much current is going through the molecules. We’re comparing the output for different molecules,” Metzger said.

First, she had to learn how to use the computer program which does the calculations.

“It was all new to me. I didn’t even know you could do this on a computer,” she said. “Once I learned the commands, though, it wasn’t too difficult.”

Part chemistry and part math, the project also seems to be part art.

“We’re drawing things on a computer,” said Metzger, who is simulating the building of molecules using a computer program.

At any time, Metzger is working with about a dozen ongoing calculations, which appear in windows on the computer she and Topham are using. She builds a simulated version of the molecules, then submits data input files. After receiving each new set of results, she adds them to a series of graphs. Topham’s interest in single-molecule electronics stems from previous research he has conducted.

This year’s PRISM project is similar to one he directed last summer.

“Jayden and I are using computational chemistry to investigate how electron transmission through a molecular device can be controlled through chemical modification. We’ll suggest ways to design molecules for optimal performance,” he said.

Metzger hasn’t yet chosen a career path. Topham, a computational and theoretical chemist, hopes this research might nudge her to follow in his footsteps.

“I’m going to turn her into a computational chemist,” he said with a laugh.

Regardless of her future plans, Metzger knows what she likes most about the PRISM program.

“The opportunity to work one-on-one with a professor is the best thing,” she said.