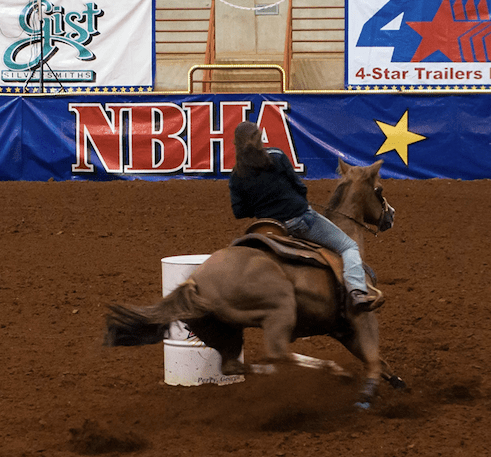 PAT CRAFTON Brittany Crafton, of Buckingham County, and her horse, J.C. Firewater, compete in Georgia during the NBHA Youth World Championships in July.

The average 16-year-old is probably not a barrel racer, much less a champion at the sport. But 16-year-old Brittany Crafton, of Buckingham County, is both. 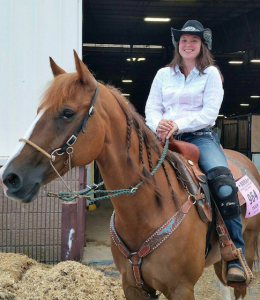 Brittany Crafton sits atop her horse.

Many may not even know what barrel racing is — a special type of horse racing in which horse and rider navigate a cloverleaf-patterned course, rounding pre-set barrels at the fastest speed possible without knocking any of them over. Placement is ultimately determined by finishing time.

Crafton, a four-year veteran of barrel racing, had a specific goal in mind when she recently traveled to Georgia to participate in the National Barrel Horse Association (NBHA) Youth World Championships.

“My goal was just to have clean, smooth runs and let everything fall where it may,” said Crafton. “So, I never expected to make it as far as I did.”

She advanced out of the two qualifying rounds which involved 1,124 competitors ages 13-19. In doing so, she reached the finals, which featured a comparatively small group of 200.

Each horse and rider had one run in the final. The final results featured five divisions of riders, determined by the fastest finishing time, which was 14.827 seconds. Adding a half-second to that time determines the range of competitors who fall in the first division (1D). Each subsequent division follows in half-second increments on top of the 1D time.

Crafton placed second in the 3D with a time of 15.880 seconds, earning the title of reserve champion for the 3D.

“I’ve won local shows but not like a big title like this,” she said. “It’s meant a lot to me to be able to go this far and just to have gotten as far as I did down there in the finals.”

It was also a big moment for her parents and her trainer, all of whom were in Georgia to watch her compete.

“I don’t think I could have been any prouder of her,” said her father, Will Crafton. “I think it was just a great feat for her to make it to the finals, especially being her first time competing in the world championships.”

She shined in an international competitive field that had five different countries represented.

The Quarter Horse she rode was named J.C. Firewater and is owned by Lee Yancey. To prepare, she and the horse trained nearly every day for a month and a half, guided by Trainer Donald “Ducky” Keller.

Crafton said the most challenging part of competing in the youth world championships was “probably battling nerves.”

She had established a good foundation of experience that helped her push through that, though.

Her start with horse riding came at her birthday party when she turned 5. Her parents arranged for some horses to be there.

“She rode a couple of them, and she was hooked from then on,” Will Crafton said. “We took her to Buckingham Equestrian Center, and she started riding there, and that was all she wrote. She’s been riding ever since.”

It has not all been for barrel racing, either.

Among the disciplines open to horses and riders is English riding, which involves, in addition to other features, a different kind of competition.

“You have a course that you do, and it’s just a bunch of jumps you have to jump, and you have to ride a certain style, and it’s all judged on appearance and the way a horse moves,” Brittany Crafton said.

She rode English for about eight years, and in 2009 when she was about 9 years old, “she actually won the state championship in English in the short stirrup class,” Will Crafton said.

Now she rides for Ducky Keller Barrel Horses at Bishop Creek Ranch in Buckingham, enjoying the speed and atmosphere of barrel racing.