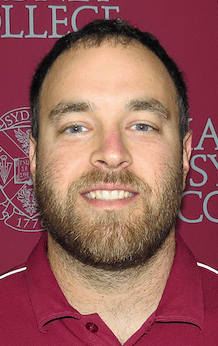 “I could not be more excited to welcome Billy to the Tiger lacrosse family,” Coach Rostan said. “He is well known around the (Old Dominion Athletic Conference) for his tenacious work ethic in recruiting, as well as strong coaching ability and character. I am confident that our current and future student-athletes will benefit from his leadership.”

Cameron said he was pleased to be on board Rostan’s staff.

“I am honored and excited for the opportunity to coach at Hampden-Sydney College,” he said. “I am also very thankful to Coach Rostan and Director of Athletics Richard Epperson for their belief and trust in me while providing a tremendous opportunity to further my career.”

Coaching under Mic Grant, Cameron has been an assistant coach since 2012 for ODAC foe Bridgewater College, which played its first varsity season in 2013. The young program improved its win total each of the past two seasons with a program-record seven wins in 2016 behind its first full senior class. The Eagles posted the biggest win in program history in 2016 as they won on the road at Virginia Wesleyan.

Prior to Bridgewater, Cameron served as the head coach for the Southern Virginia Select Lacrosse Club for three seasons. Aside from his club coaching duties, Cameron also was the assistant boys lacrosse coach at Salem High School where he coordinated the offense and helped propel the Spartans to the Virginia High School League AA state quarterfinals and a top 15 state ranking. Cameron’s Salem duties also included time as a special education instructional assistant, during which he worked with students with multiple disabilities.

A four-year starter and 2008 All-American, Cameron played for ODAC rival Roanoke College. Cameron was a first team All-ODAC selection as a senior and helped lead the Maroons to a pair of NCAA semifinal appearances and two ODAC Championships.