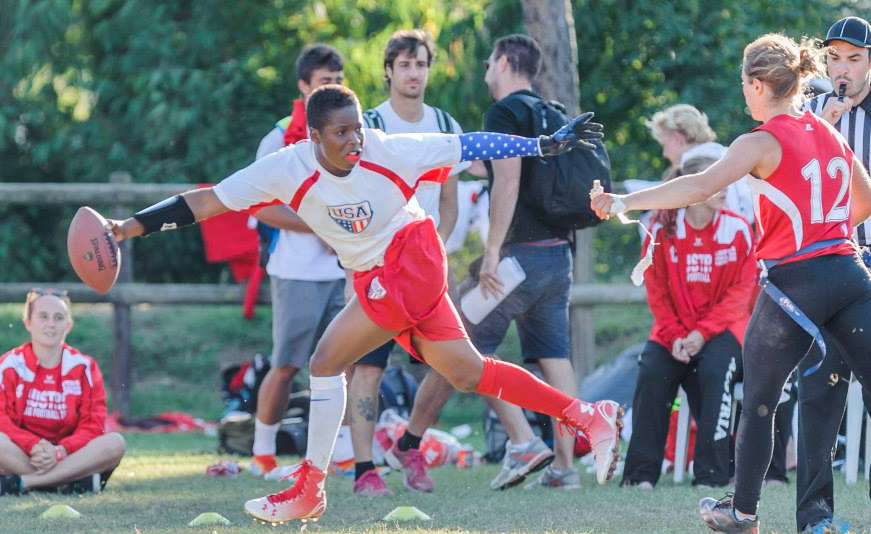 FEDERAZIONE ITALIANA DI AMERICAN FOOTBALL Stacy Agee, originally of Buckingham County, competes on offense for the U.S. Flag Football Women’s National Team at the IFAF Flag Football World Championship in Grosseto, Italy, in 2014. She will represent her country again this year in the Bahamas.

When the 11-player roster for this year’s U.S. Flag Football Women’s National Team was announced, it included the name of a Buckingham County native — Stacy Agee.

She will travel with her team and the U.S. Flag Football Men’s National Team to the Bahamas for the 2016 International Federation of American Football (IFAF) Flag Football World Championship held Sept. 8-11.

The event comes every two years, and Agee was also part of the 2014 national women’s squad, which reached the title game and came up short against Canada, 32-21.

Agee is relishing another chance to represent her country.

“It was a lot of fun in 2014, but I’m just super excited because I think we’ve added a few more pieces to the team this year, and hopefully we’ll be bringing home the gold, for sure, this time,” she said.

Between the men’s and women’s teams, 18 nations will be represented at the event in the Bahamas.

David Fried, a member of the U.S. Flag and Touch Football Hall of Fame, coaches both the men’s and women’s teams for the U.S.

Fried selected Agee from a field of about 100 applicants. He first met her about two-and-a-half years ago at a flag football tournament.

“I was watching her play, and her fierce competitiveness coupled with her incredible skillset just was an instant classic for me,” he said. “So, I asked her that day if she was interested in joining my team, and she said yes, not on the spot, but I had called her a couple weeks later. … Then she played with us two years ago in Italy, and she was everything that we wanted and more. She just brings so much leadership to the team.”

He said women’s football is quite popular, between tackle and flag, which was helpful to him as he formed the 2016 U.S. women’s team.

“I had such a wide variety of talent to choose from, but (Stacy’s) one of four returning players from two years ago,” he said.

Agee, who lives in Maryland, is 45 years old and estimates she has played flag football competitively for about 22 years, starting in the mid-1990s when she lived in Richmond.

She later moved to Texas, where she played women’s tackle football for nine years, competing in 2000-07 for the Houston Energy in the Women’s Professional Football League. She took a break and returned from retirement to play 2008-09 for the Houston Power.

Even during her tackle football career, she continued to play in at least one competitive flag football tournament a year, which generally required travel to Florida or Georgia.

Agee has developed a name for herself in the flag football community, having played for a variety of teams, including the New York TNT, and she has even had her own team, the Houston Playmakers.

“I love sports, and I love football,” she said, explaining the enduring appeal flag football holds for her. “I like the camaraderie of it because we don’t get to see each other every day or once a month or once a week, so it’s kind of cool to come back to these tournaments,” which allow reunions between longstanding teammates.

She has a simple desire to compete, and as women’s sports are starting to be recognized more now, she said she wants to be part of history, of something fantastic and fun.

“To be able to look back on on it and to say that I played competitively for a number of years, it’s something that I’m looking forward to being able to talk about when I get a little older,” she said.

Typically a running back when she played tackle football, Agee has played as a slot receiver and a long snapper for the U.S. Flag Football Women’s National Team.

Fried was unsure if she will play the exact same role this year, but said, “I do see her predominantly playing again in the middle of the field somewhere.”

While there is a contact version of flag football, the IFAF Flag Football World Championship will feature the non-contact version, with no blocking allowed. Teams will play five-on-five and everyone is an eligible receiver.