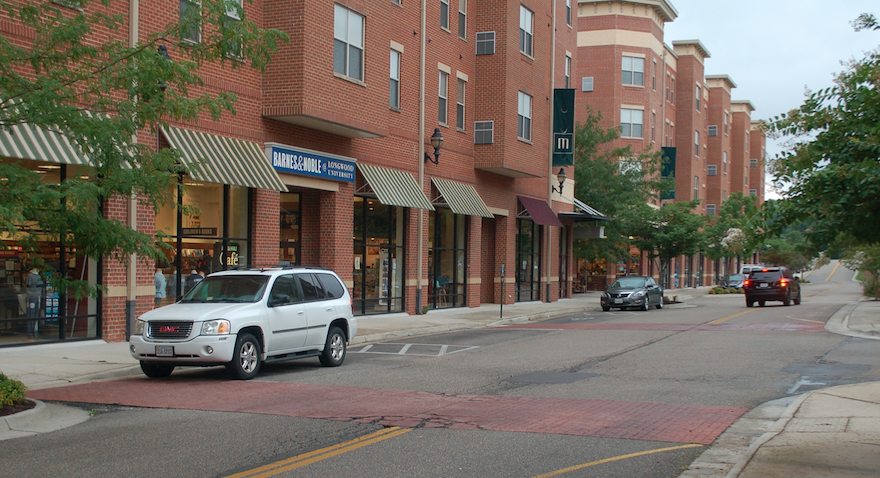 JORDAN MILES | HERALD In purchasing the ground floor retail space at Midtown Square on Main Street in downtown Farmville, the Longwood Real Estate Foundation hopes to add to the number of businesses already there. The foundation purchased about 44,000 square feet of space for $7.1 million.

The purchase includes the ground floor of the four buildings making up Midtown Square on Main Street in downtown Farmville. The foundation has owned the top three floors, which is residential space for university students, since the buildings were opened in 2006.

The foundation also purchased a 144-space parking lot behind Midtown Square for $387,500 from Park Properties, along with a small lot of land between the Midtown complex and the Centurylink building for $232,500.

The properties, purchased by Longwood Midtown CRE LLC — an entity of the foundation — were sold by Mid Town Square LLC, Park Properties Inc. and Bluestone Land LLC, all of which have a principal and registered office listed as 1821 Avon St, Suite 200, in Charlottesville, all with William N. Park as the registered agent.

“I won’t say that this was in the cards from the very beginning, but … it’s always looked bad that that ground floor space never filled up,” said Ken Copeland, who serves as Longwood’s vice president for administration and finance. “And it’s never looked bad on Park Properties. Who has it looked bad on? Everybody knows that those are Longwood students living down there, so it’s always … bothered us a little bit that we’ve got a lot of dark and empty space down there. Hopefully we can turn that around and fill up the space down there and make it a more vibrant community for the whole community and for our students as well.”

According to the deed of sale, the retail space was last assessed at $4.3 million.

“Obviously a good portion of that is already occupied,” he said.

The newly acquired space will be rented to businesses and used by Longwood, he said.

“My first reaction is that I think Longwood better make better use of that space down there on the ground floor than what’s been done with it,” Farmville Town Manager Gerald Spates said. “I think it makes sense for Longwood to own the whole thing.”

“We own the parking lot on the corner of Putney and Virginia streets. It adjoins this parking lot that was there originally not long after we built Midtown,” Copeland said of the acquired parking spaces behind Midtown Square. “Those (retail) spaces can be fairly easily subdivided the way the buildings are laid out. For the vacant spaces, there’s any number of different ways it can be carved up.”

Longwood University is temporarily moving its fitness center from its current location along South Main Street to one of the vacant retail spaces because of the vice presidential debate.

“The plan right now is also to move student health … moving that function into the former urgent care doctor’s office that’s right next door to the credit union,” Copeland said. “It was already set up … That’s will be for all of our students.”

The foundation is working to bring businesses to the retail space.

“It’s all speculative at this point,” he said of the plans.

“I think Longwood and the real estate foundation are very excited about this acquisition,” added Louise Waller, Longwood’s executive director of campus planning and construction. “We have some incredible current tenants and we’re looking forward to our new tenants that are making this area lively and supportive of our community.”