The 2016 Commonwealth Games which unfolded over the weekend at Liberty University invites track and field athletes both young and seasoned to compete, and representatives from the area in both categories brought home gold. 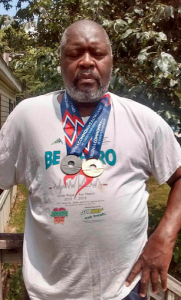 Of Ford’s win, Cumberland Head Track and Field Coach Kenneth Jasey said, “I wasn’t surprised because she’s one of the top throwers in (Virginia High School League) 1A.”

Ford, a team captain for the Dukes, is a versatile athlete, known for more than just her arm strength.

But it was in the discus where she represented Cumberland earlier this year in the VHSL Group 1A State Track and Field Championships, placing sixth with a 98-1 throw.

“Now I’m just looking forward to seeing her put in a whole lot of work because she didn’t get the placing that she would have liked at states,” Jasey said. “Her goal was to be the state champion, and so I’m looking for a whole lot of big things from her.”

Baker entered the realm of track and field as a competitor for the first time in approximately 20 years.

“At the last minute, I decided I would give it a shot,” he said.

In addition to his shot put win, he earned silver in the discus throw with a 95-6 toss of the four-kilogram discus.

“That was alright,” Baker said of his performance. “I didn’t even realize I had won the shot put.”

Multiple age groups were competing simultaneously, making it difficult to discern who was ahead.

“And the discus, fortunately the (Prince Edward) kids weren’t there to see, because I kept fouling,” Baker said. “I probably, if I’d have done another standing throw, might have been able to throw far enough to win, but I decided that I would go ahead and spin and go for it.”

Though his decision to compete did not come long before this past weekend, Baker did have a few days to practice.

Overall, he enjoyed the experience of competing in Lynchburg.

“In fact, a lot of the people there were already making plans about, ‘See you next year’ and everything, because some of the people that I saw there were people that competed last year, and they look forward to it,” he said. “There was a gentlemen there from Halifax that was throwing the shot put that was 74 years old. There were other guys … running the steeplechase; they were in their 50s and stuff like that. In fact, there were probably as many older guys there, from 50 and up, as there were younger guys.”

On Saturday and part of Sunday, Baker helped run the discus event for different age divisions when he was not competing.

Baker also highlighted the performance of Saye and Truth Woodard, both of Farmville. Saye Woodard, a rising sixth-grader, competed in the bantam division (9- and 10-year-olds), producing an 11-3 leap in the long jump and finishing the 400-meter dash in one minute, 16.97 seconds. She earned a silver medal in both events. 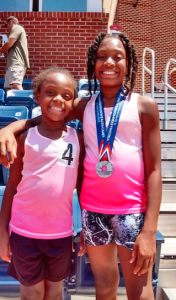 JAMES BAKER
Saye Woodard, right, and Truth Woodard competed in the Commonwealth Games over the weekend in Lynchburg.

“She ran well, and she jumped well, so that was nice for her,” Baker said. “I was happy for her.”

Truth Woodard, a rising third-grader, competed for the first time, participating in the long jump and the 100-meter dash in the sub-bantam division (7- and 8-year-olds).

“She did well first time out of the gate,” Baker said.

A few days remain to sign up for youth football and cheerleading for residents of Farmville and Prince Edward County... read more