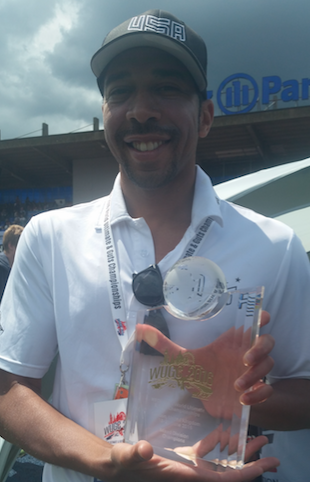 STACEY WALDRUP Ernest Toney Jr., a Farmville native, holds a world championship trophy recently earned by one the USA Ultimate national teams that he helped assemble. All five of the U.S. teams he managed went undefeated and won gold medals.

The former Prince Edward County High School student-athlete served as team manager for five USA Ultimate national teams, each of which went undefeated and claimed the gold medal at the 2016 World Flying Disc Federation’s World Ultimate and Guts Championships (WUGC) in London near the end of June.

Expressing excitement for the teams’ clean sweep of the competition, Toney said, “I still don’t think I fully grasp how awesome or how hard of a feat that was.”

He said if it has ever happened before, it was 20 years ago when the sport was distinctly in its infancy.

“At this level of play at this day and age, it has not happened where a country has swept all divisions without losing a game,” he said.

The five divisions include Men’s (players 18 and up), Women’s, Mixed, Masters Men (players 33 and up), and Masters Women (players 30 and up).

The WUGC is an event that is held once every four years and is considered the top international competition for Ultimate Frisbee. It was bigger than ever this year, featuring as many as 3,000 athletes and 115 teams from 39 countries.

“The last time this event happened, the U.S. delegation underperformed by their standards,” Toney said. “We didn’t walk away with the success that we had at this event, so there’s a lot of effort put into making sure that we could get the right coaches, the right players. And I’m very, very proud and very happy of the accomplishment.”

Toney is employed by USA Ultimate, the national governing body for the sport of Ultimate Frisbee.

“Since 2014, I’ve been working as the manager of competition and athlete programs,” he said. “What that means is I’m pretty much responsible for the operations of Ultimate Frisbee programs throughout the country.”

The Masters Men and Masters Women teams that won gold in London earned their right to go by winning the Masters national championships in 2015.

In contrast, an extended process led to the formation of the U.S. teams competing at the WUGC in the sport’s marquee divisions — Men’s, Women’s and Mixed.

Toney’s role in creating the teams began about a year ago.

“My responsibility was to work with a group of people to interview and select the head coaches and assistant coaches from each team,” he said. “Once we have the coaches in place, I manage the player application process. So, we had about 700 people who applied for a spot on one of these teams, and I work with the coaches to narrow that down to basically invite about 210 athletes to attend an East Coast and a West Coast tryout camp earlier this year in January.”

He then helped coaches and evaluators to narrow that number down to those who made the teams.

This was the first time USA Ultimate sent all-star teams in the marquee divisions.

Toney’s ability to evaluate talent is at least in part a product of his history with the sport.

“I think I played Ultimate for the first time in 1998 with some friends and teammates from the Prince Edward soccer and cross country teams,” he said. “I’d already had a passion for disc sports, but I believe 1998 was the first time that I played.”

A star in cross country and track and field, with district championships plus all-region and all-state accolades to show for it, Toney was already a proven athlete when he joined the Ultimate Frisbee team at James Madison University in 2000.