The good and the bad in Mother Nature’s garden 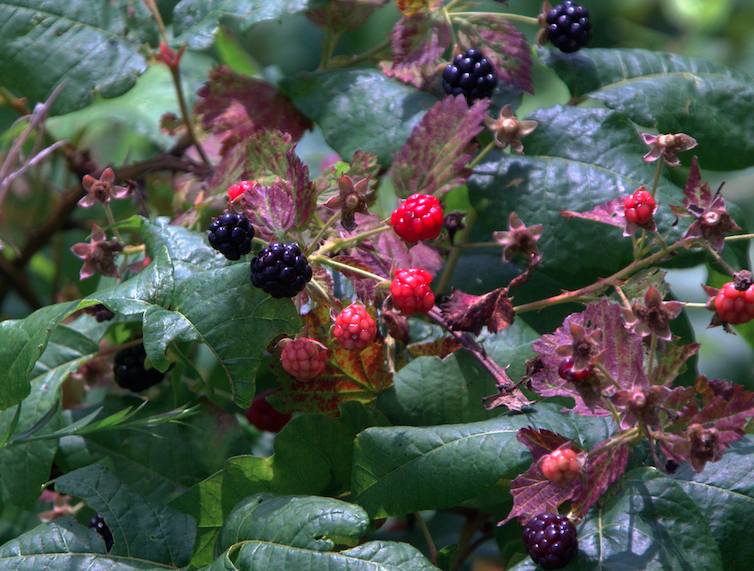 Blackberry picking was one of the author’s favorite forbidden activities after school was over in mid-June.

Wa kid, I couldn’t wait for school to be over in mid-June so that I could spend time with my grandma and my aunt. The rules were different in their homes. I was allowed to do lots of things that were strictly forbidden at my house. And blackberry picking was one of my favorite forbidden activities.

On my aunt’s farm, great, tall thickets of blackberries grew in the lowland down by the creek, and the bushes were always covered with big juicy berries. From my mother’s point of view, however, this was seriously dangerous territory. There were bound to be lots of snakes in the berry bushes, and she was deathly afraid of all snakes, even hypothetical ones. In addition to the snakes, there probably was poison ivy growing around the blackberry bushes, and my mother was seriously allergic to poison ivy. So was I.

Luckily for me, both my grandma and aunt believed that taking risks was a part of life that all kids should experience. And so, a cousin and I went blackberry picking in the lowland when my mother wasn’t around. We carried milk buckets and picked until they were half filled with berries and then we went wading in the creek. On really hot days, we sat on our favorite rock in the middle of the creek and drank sodas that we had left to chill in the water while we were picking berries. Wading in the creek and soda consumption — two more forbidden pleasures.

I never, ever saw any snakes lurking in the blackberry bushes, but my mother was right about the poison ivy. Some summers the price for the bounty of berries was a nasty poison ivy rash all over. Big watery blisters that took forever to heal.

Today things have changed. Not even favorite aunts and grandmas would let two eight year olds pick berries and wade in the creek without supervision. Who knows what might happen!

There’s also a tendency these days to believe that only native plants should be planted in home gardens and that they’re all good. Well, as a seasoned blackberry picker, I can tell you that there are some natural born thugs in Mother Nature’s garden, and poison ivy definitely has some scary thuggish tendencies. Fortunately, it also has some good attributes.

Poison ivy (Toxicodendron radicans) belongs to the same family as cashews and mangoes. Toxicodendron means poison tree, which is appropriate since all of these plants produce irritants that affect some people. Poison ivy contains urushiol, an oily compound that causes fierce skin irritations in many humans. Urushiol is so potent that just ¼ ounce could potentially cause a rash in thousands of people. Animals, however, aren’t sensitive to urushiol. Some scientists speculate that this compound evolved to help poison ivy retain water.

In early spring, poison ivy has light green leaves and clusters of tiny greenish white flowers. By late summer, the flowers have been replaced with grayish white berries, and the leaves turn glorious shades of red and gold. Throughout the year, poison ivy provides many types of support for wildlife. The vines and shrubby plants provide shelter for small animals. Deer, muskrats and rabbits eat both twigs and leaves. At least 60 species of birds, including both game and song birds, eat the berries, especially during winter when other food sources may not be available.

Poison ivy is a rapid grower that can climb trees and fences or grow close to the ground as a small shrub. Its growth habit is highly variable, and it’s not terribly picky about where it grows. It can be found as an understory plant in forests and even in suburban settings. Its favorite habitat is anthropogenic, meaning man made or disturbed areas.

Poison ivy tolerates a wide range of growing conditions and isn’t daunted by global warming. In fact, it thrives on the additional carbon dioxide in the atmosphere; poison ivy’s growth rate and potency are just getting stronger and stronger. There’s more poison ivy now than when European settlers first arrived. It’s a very tough plant.

Poison ivy. A native that has brilliantly colored foliage in fall and provides food and shelter for wildlife. It sounds like an interesting addition to the home garden, doesn’t it? Unfortunately, its thuggish tendencies mean that most of us won’t plant it. We might tolerate it in a fence row, but definitely not in the rose garden or the blackberry patch. It’s just too risky for us humans.

Happy blackberry picking, but be sure to watch out for poison ivy. Snakes too, both real and hypothetical.