‘That’s what I’m used to doing’ 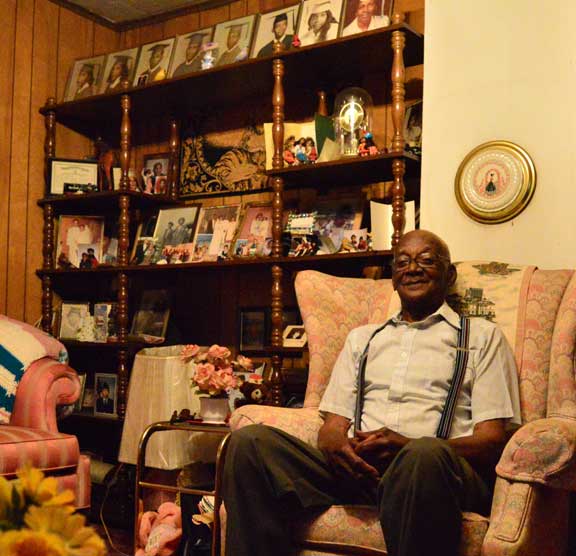 Surrounded by photos of his family and accolades he’s received, 96-year-old Deacon Hayes Wiley Jr., of Cumberland, smiles in his living room. He’s lived in the same house since 1947. (Photo by Halle Parker)

Every time I think about Jesus, I feel good, good, good.”

Deacon Hayes Wiley Jr., of Cumberland, laughed as he listed his favorite songs to sing in his church’s choir, including “I Feel Good” and “Try Jesus.” The laughter was hearty and strong; one could only imagine what his voice would sound like accompanied by the force of a choir.

How his wiry frame might sway as his passionate devotion to his faith moved through him on Sunday mornings, his leathery hands clapping to the beat.

Full of life at 96 years old, working every day for his church, his job or his family.

Wiley started attending Green Creek Baptist Church with his family when he was 12 and continued to for the next 84 years, except for a few years in the late 1930s and early 1940s when he moved to Baltimore, Md. He was named a deacon in 1962.

On Saturday, June 25, the church recognized Wiley with a certificate of appreciation and a large ceremony in his honor for his years of service.

“It lifted me up. I enjoyed it, the people turned out so well and the Lord is good. I wouldn’t think that many people thought about me. I always try to do the right thing,” he said.

Throughout his life, Wiley said he felt like he had been successful in his life’s motto, “If you do right, you’ll come out alright.”

“You do right, it’ll take you farther than any dollar ever can,” he said. “I love everybody, I love those that don’t love me … I pray for the entire world.”

He remains active, working within the church, leading Sunday school and helping with small building repairs. For over 30 years, he served as the church’s treasurer, giving up the position in 2010.

Outside of the church, he still works twice a week for Andrews Large & Whidden Inc., a construction company in Farmville, cutting grass and running the office. He has worked for the company since 1945, driving delivery trucks around the country. He finally turned in his commercial driver’s license last year at age 95. “I can’t drive big trucks like I used to,” said Wiley.

For Wiley, working is what he’s used to doing and he doesn’t plan on stopping any time soon.

“The Bible said if you don’t work you don’t eat … People ask me why I work, (and I say) ‘Well, because I like to eat,’” he said pointedly. “My children tell me to stay, that I don’t have to work, I tell them, ‘I know it, but I’m going to work as long as I can until the good Lord tells me to stop.’”

Since his wife, Susie B. Wiley, died of congestive heart failure nearly six years ago, Wiley said work gives him something to do.

Before his wife fell ill, she told Wiley she hoped she would die before him.

“She said she hopes that she leaves before (me), and I said, ‘Well that’s in the Lord’s hands, but we do know we’re going to leave each other one of these days.’ I told her, ‘According to the word, we’ll meet again,’” said Wiley. “And that’s the way it turned out. That was her wishes to leave and God took her.”

Wiley’s wedding was held on Aug. 25, 1940 in Green Creek Baptist Church, and lasted for 70 years, parted only by death.

“I cry some nights, I miss her so,” he said. They had 10 children together, all still alive. The oldest, Betty Wiley, was born in 1941, and neighbors her father.

The majority of Wiley’s family is buried in Green Creek’s cemetery. Walking among the graves, he points out his mother, his father, his brothers, and his wife.

His wife’s name on the tombstone is accompanied by his own, reading 1920 with a blank next to the hyphen.

Wiley said he plans to join her and lie next to his wife “when the Lord so chooses.”

Until then, Wiley said he will continue to work, serve his church and live in the same home he has since 1947.