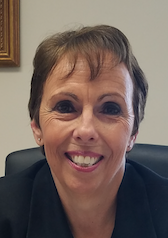 New Horizon Bank is bidding a fond farewell to Shelby B. Scott, who will soon retire from the bank.

Scott has served as the bank center manager of the Powhatan bank since its inception in 2009.

Scott began her career as a teller in 1979 with First National Bank in Farmville. In 1982, she joined Bank of Powhatan in Cumberland, and after several mergers and acquisitions, Scott laughingly said she “worked for Jefferson National Bank, Wachovia, One Valley Bank and BB&T all without ever leaving her desk.”

In 2003, Scott joined Bank of Powhatan, which then became TransCommunity Bank and later merged with Essex Bank.

Scott served as bank manager there until joining New Horizon Bank in 2009.

A constant amid all the changes was the working relationship between Scott and James Keller, the president and CEO of New Horizon Bank.

Scott and Keller met in 1979 when Scott started her first job with First National Bank in Farmville.

When asked about Scott, Keller said “her work ethic and dedication to her job is the first thing to enter my mind.”