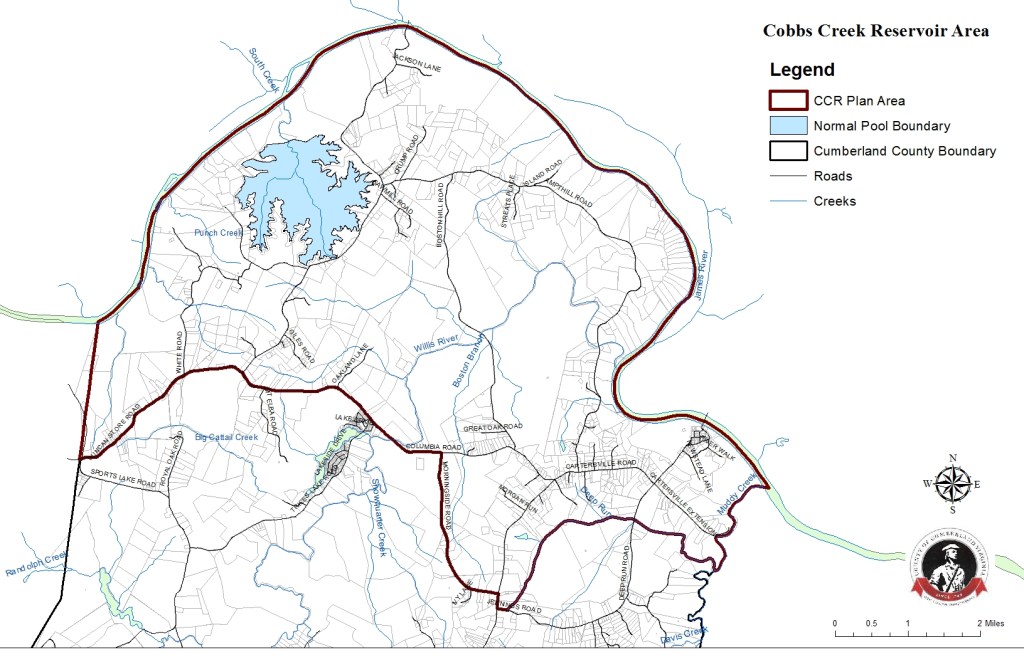 CUMBERLAND COUNTY The Henrico County-owned Cobbs Creek Reservoir will be located in northern Cumberland County. The project, encompassing 15 miles of stream bed, should be complete in 2022, according to officials.

Could you provide an update on the Cobbs Creek Reservoir construction? Is it on schedule?

Work on the Henrico County-owned Cobbs Creek Reservoir in northern Cumberland is continuing at a steady pace with bidding on facility and dam construction planned over the next several months.

The $280 million reservoir project will encompass 250 linear feet, or just over 15 miles of stream bed, according to the original permit for the reservoir issued by the Virginia Department of Environmental Quality (DEQ).

The reservoir will permanently impact 15.3 miles of stream, almost 31 acres of wetlands and 4.6 acres of open water, according to the permit.

The reservoir is expected to be complete in 2022.

The project, which began over three years ago, is on schedule, said William “Ed” Overmann, capital project manager with Henrico’s Department of Public Utilities.

According to Overmann, Henrico County awarded the utility corridor preparation contract to Thalle Construction Co. The North Carolina-based company bid $5.2 million for the project, which is reaching its final stages.

Construction crews are in the process of moving two high-pressure petroleum lines belonging to Colonial Pipeline Co., which are located on the land where the reservoir will be.

According to Overmann, Colonial Pipeline awarded the contract for the relocation to Primoris Service Corp., a Texas-based contractor, for $32 million.

“Primoris should complete the relocation of the pipeline and remove (the) existing pipeline in the old easement, within the proposed footprint of the reservoir,” said Overmann.

This project is slated for completion by August or September, he said.

Cumberland County is working on adopting a Watershed Protection Ordinance for the reservoir. County Planning Director and Zoning Administrator Sara Carter said, “(the ordinance) is currently with the Henrico County attorney’s office. We have given them comments and are awaiting a draft.”

“Cumberland County is working on a Comprehensive Plan amendment for the northern portion of the county to address changing land uses in the area,” Carter said.

Three public meetings have been scheduled “to begin looking at land use issues in the area and get people talking.”

Henrico County “…(continues) to coordinate with Cumberland officials regarding the details for recreation opportunities at the reservoir,” Overmann said. “We expect the reservoir to be open to the public from dawn to dusk, seven days per week, with fishing, boating and swimming in designated areas.”

Overmann said Henrico and the Virginia Department of Game and Inland Fisheries (VDGIF) are collaborating on construction of a boat launch facility.

“VDGIF will stock the reservoir with fish and monitor the facility for compliance with boating and fishing regulations,” he said.

In September, “Dominion Virginia Power will start their relocation of the transmission lines to the new corridor and remove the existing (power lines) in the old easement,” said Overmann. According to Overmann, the transition of power lines will be completed by December. Overmann said Henrico anticipates that advertisements for bidding on the dam and facilities construction project will open between October and November, with a bid being chosen between March and April.

This is a corrected version of an the original story.