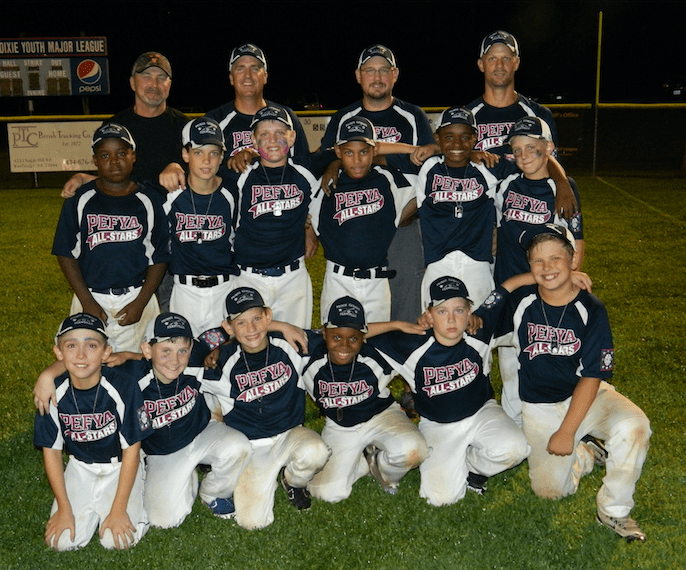 The Prince Edward-Farmville Youth Association (PEFYA) All-Star baseball team was eliminated Tuesday night from the Dixie Youth District 5 Minor League All-Star Tournament, but it put up a fight at Lenhart Field worth remembering.

The boys were facing a Dinwiddie National All-Star team that has been blitzing its way through the competition. Though the talented squad improved to 4-0 on Tuesday, its victory over PEFYA was no blowout but rather a come-from-behind 12-9 effort.

In its three prior games combined, Dinwiddie outscored opponents 61-17.

“Tonight we showed up, and they got 12-9 with the bases loaded in the bottom of the sixth and two outs, so I think we had an awesome showing,” PEFYA Manager Dave Furlong said. “It was a battle between both teams, and it was just a phenomenal baseball game.”

After Dinwiddie took a 2-0 lead in the top of the first inning, it was stopped in the second inning, as PEFYA pitcher Noah Boehmer threw three strikeouts. He finished with five strikeouts in 4.1 innings of work.

“When he is on, he is on fire, and nobody can figure him out, and him being a lefty, I think that also helps him out,” Furlong said. “And the catcher, Austin Queensberry, those two work so well together, I just pair them up and they go to work.”

PEFYA’s offense got going in the bottom of the second, taking a 3-2 lead. Aiden Morgan hit a two-run double to the centerfield fence, and Martin Barnett hit a big single to centerfield that brought in the third run.

Dinwiddie came back with three runs in the third, its cunning base running helping make the score 5-3. But PEFYA responded with four runs in the bottom of the inning to go up 7-5.

A Clevante Watkins hit and Dinwiddie errors allowed another run, Mitchell Holman got a two-run hit and a hit by Sawyer Furlong allowed Holman to score.

Following a delay due to lightning, PEFYA went up 8-5 when Boehmer reached home on an error.

The Dinwiddie National All-Stars rallied and went up 10-8 in the fifth, aided in part by a two-run home run that bounced off the top of the centerfield fence. Harold Landis relieved Boehmer on the mound and helped his team get out of the inning.

PEFYA’s Andreas Noraas tripled and and then reached home on a passed ball to make the score 10-9 going into the sixth inning.

“The word for the night was ‘fight,’ and that’s all we did for six innings was fight,” Manager Furlong said. “And they’re just a great group of kids — no attitudes, lots of good bats and (they) just all came together and (are) just a great team.”

PEFYA ended up with a 1-2 record in the tournament, including an 11-4 victory over the Dinwiddie American All-Stars on Monday. But perhaps the greatest showcase of the PEFYA All-Stars’ abilities came on Tuesday against Dinwiddie National.

“I’m so proud of these kids,” Furlong said. “They worked so hard, and they showed how hard they worked tonight. The last two, three weeks’ worth of practice, it all pays off to come out and put a display on against a team that has just annihilated all of the other teams, and we just went toe-to-toe for six innings.”