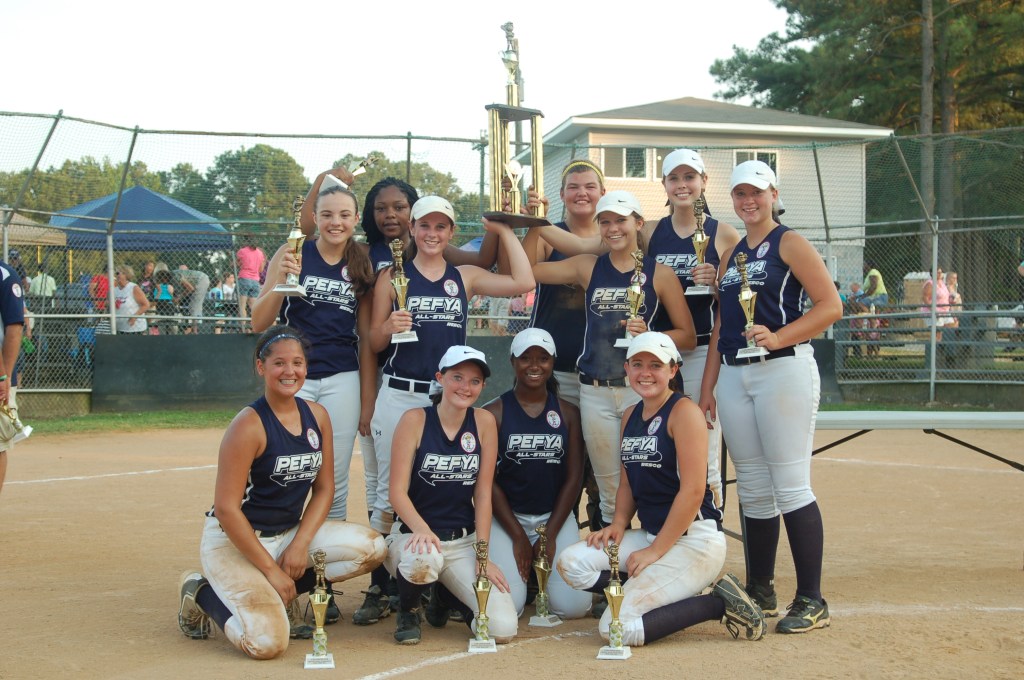 PEFYA, the last undefeated squad in the 12-team tournament, routed Blackstone 14-0, winning the title and punching a ticket to the 2016 Dixie Softball Debs World Series in Alexandria, La., next weekend.

“I’m very proud of the girls,” PEFYA Manager Michael Roach said. “It’s something they’ve worked hard for, not just this year but every year up to this point. All of them have played ball for a long time, and it’s wonderful to see that work pay off with the World Series.”

PEFYA President Ralph Dews was on hand for the game and said that this was the first Debs team in the association to reach the World Series during the time he has been involved, which spans nearly three decades.

“It will be a one-in-a-lifetime experience for them, I’m sure, getting to go to the World Series,” he said. “It’s quite an accomplishment for them, especially as many young girls as they have, too.”

Remarkably, six girls on the roster — half the team — fall below the standard age range for Debs, which is 16-18 years old.

Accounting for why she and her PEFYA Debs teammates were able to get the job done, 13-year-old third baseman Jaden Capati said, “A lot of us have been playing with each other since we were Darlings age,” adding that “Hannah-Gray (Schmidt) and I, we’ve been playing since when we could walk.”

Through many of the girls having years of mutual experience, “we’ve bonded, and we’re family,” Capati said.

They avoided any complacency Friday. They had defeated Blackstone 10-4 two days prior, and Blackstone would have needed to beat PEFYA twice Friday evening to win the title, but the PEFYA girls were not laid back due to having two shots at clinching a World Series berth.

The game was scoreless after the first inning, but PEFYA scored every inning after that, earning two runs in the second, two in the third, four in the fourth and six in the fifth.

Because Blackstone was the home team, it was able to get a turn on offense in the fifth, but when PEFYA’s defense kept it from closing the gap on the scoreboard, the mercy rule came into effect with the final out of the inning.

“All the girls played well,” Roach said. “Defense was excellent, pitching was excellent, hitting was excellent — all phases of the game. They played pretty much a perfect game, really, and (the) score shows that.”
Roach praised Schmidt for a strong performance in the circle, where she played for all five innings.

Schmidt went 4-for-4 at the plate, Capati went 3-for-3 and Caroline Seal went 3-for-3 to lead PEFYA offensively.

The Debs World Series, which starts July 30 in Louisiana, will feature 11 teams, including the PEFYA Debs, who will represent Virginia. They have a first-round bye, playing their first game at 9 a.m. on July 31 at the Johnny Downs Sports Complex against either Alabama or the host team.

But before heading south, they will need to raise money for the trip.

“If anybody would like to donate to help us get to the World Series, anything would be appreciated,” Roach said.

A Go Fund Me page has been set up — https://www.gofundme.com/2fzthtft — where financial contributions, large or small, can be made to help the team.

The Debs will also be holding a chicken cookout fundraiser Tuesday at the Caboose, located behind the j fergeson gallery. Dinners including chicken, baked beans, coleslaw and a roll for $8 will be sold starting at noon. For $1 more, a drink can be added.