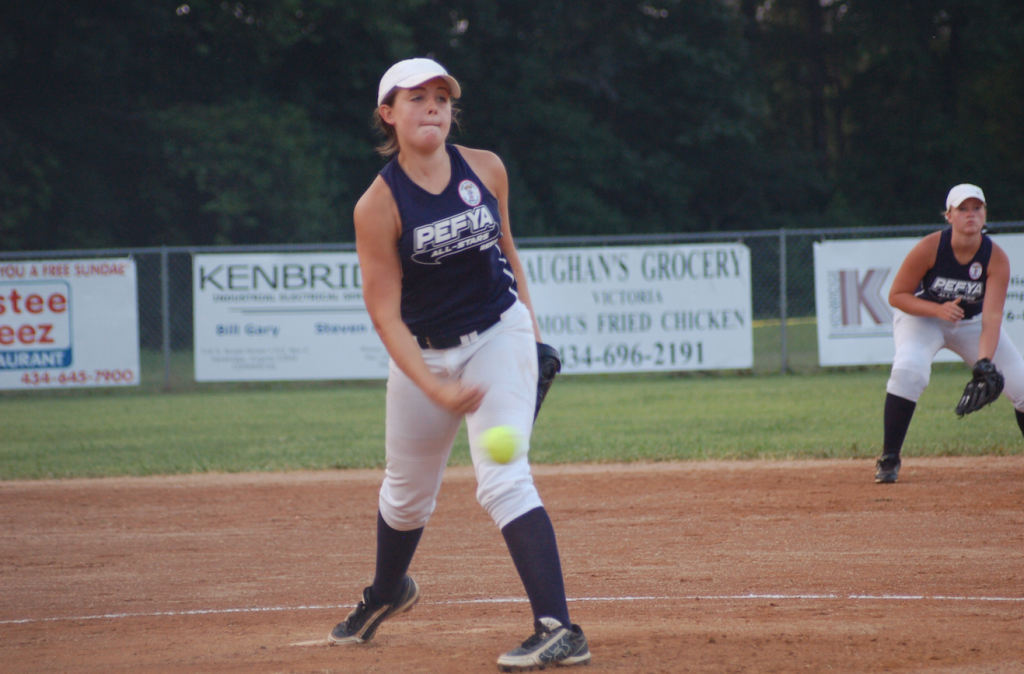 Hannah-Gray Schmidt, of the PEFYA Debs, releases a pitch against Blackstone during the battle of the unbeaten teams in the Dixie Softball Debs State Tournament in Kenbridge on Wednesday evening. (Photo by Titus Mohler)

The Prince Edward-Farmville Youth Association (PEFYA) Debs softball team continued its success in the Dixie Softball Debs State Tournament, improving to 3-0 in Kenbridge on Wednesday evening with a 10-4 victory over previously undefeated Blackstone.

“It was a great game,” PEFYA Manager Michael Roach said. “The girls played really well, both hitting and fielding. Excellent job all around.”

PEFYA, the last undefeated team in the tourney, was set to play Amelia on Thursday at 8 p.m with a Thursday win, PEFYA would advance to Friday’s championship series.

The girls on the PEFYA squad moved forward on Wednesday without Melissa Wright, who was sick.

“She’s been solid, kind of the team leader,” Roach said. “So, if we were struggling or in a position where we wanted to settle down, her being pretty much the elder statesman on the team, she was really good at settling the team down. But the team did extremely well tonight, even though she wasn’t able to be here.”

In the top of the first inning, PEFYA took a 1-0 lead, but Blackstone responded significantly, taking a 4-1 lead into the second inning.

PEFYA could not score in the second, but strong play from pitcher Hannah-Gray Schmidt and the defense kept Blackstone from adding to its lead.

It was in the top of the third when PEFYA turned the game around. It put Blackstone’s defense in situations where it had to make plays, and more than once, that defense was not able to.

Alexa Marzloff registered a hit that allowed Alexis Gayles to score, a single by Schmidt drove in Gracie Hodges and a Mary Grace Amos single scored Marzloff to make the score 4-4.

Efficient defense held Blackstone in check in the third inning. In the fourth, a hit by PEFYA’s Caroline Seal loaded the bases with no outs. Gayles drove in the go-ahead run, and her teammates helped grow the lead to 7-4 before the end of the inning.

Jaden Capati was a notable standout at third base. To end the fourth inning, she made a great throw to Shaunice Beasley at first base to save a run. To end the fifth inning, she caught a line drive and threw a runner out who was scrambling back to first.

For the game’s final three innings, PEFYA got outs against the first three batters Blackstone sent to the plate.

Manager Roach said that offensive success could be found “all through the batting order — timely hits, too,” that kept the team from stranding runners on base.