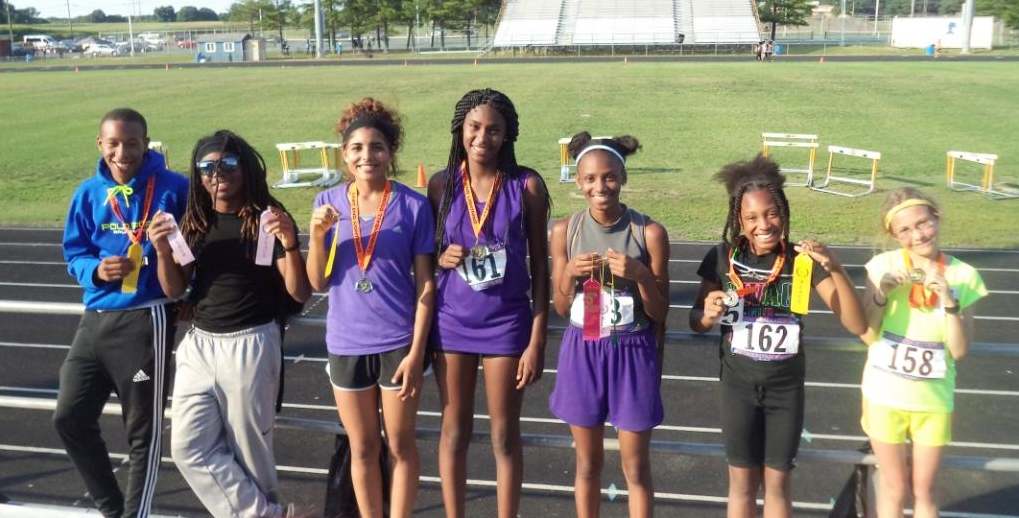 Area track and field athletes made their presence known at the 31st running of the Cannonball Cooper Age Group Championship held at Varina High School in Henrico on July 2.

The invitational featured competitive opportunities for athletes ranging in age from 5 to adults.

The 10 athletes from Prince Edward competed under the team name Farmville Area Track Express. There were seven girls who, as a group, placed fourth, and three boys, who placed fifth as a group.

Rajai Walton, of Prince Edward, claimed first in the high jump for the young men division (ages 17 and 18) with a 6-06 jump.

“The guy that he beat in the high jump was the kid that beat him at the state track meet,” Prince Edward County High School Head Track and Field Coach James Baker said.

Walton edged out state champion David Danek, who also produced a 6-06 jump at the invitational but with an important difference.

“Rajai cleared 6-06 on his first attempt, and this other kid got it on his third attempt,” Baker said. “So to break the tie then, they go back to the last height cleared and see who cleared it in the fewest attempts.”

Walton also took fourth in the long jump with a 20-03 leap.

Ford also competed in the shot put, her 27-7 1/4 throw putting her in fourth behind Muhammad, who produced a 29-09 throw.

Elizabeth McElfresh, of the Farmville Area Track Express, was the lone runner in the 3000-meter run for the girls midget division (ages 11 and 12), finishing in 13 minutes, 56.17 seconds.

Other Farmville Area Track Express athletes who took second in events included Jordan Booker in the triple jump for the girls intermediate division (ages 15 and 16) with a 31-9 1/2 jump and Saye Woodard in the discus throw for the girls midget division with a 29-06 mark.

In the girls intermediate division, Salma Muhammad, of Prince Edward, placed third in the long jump with a 15-09 jump and tied for fourth in the triple jump with a 30-11 leap.

Brandon Scott, of Prince Edward, had a pair of sixth-place finishes in the young men division, competing in the 200 meters, finishing in 23.82 seconds, and the 100-meter dash, finishing in 11.43 seconds.

Hykeim Wynn participated in the boys bantam division (ages 9 and 10), placing seventh in the 100 meters with a 15.86-second finish and ninth in the long jump with an 8-11 jump.