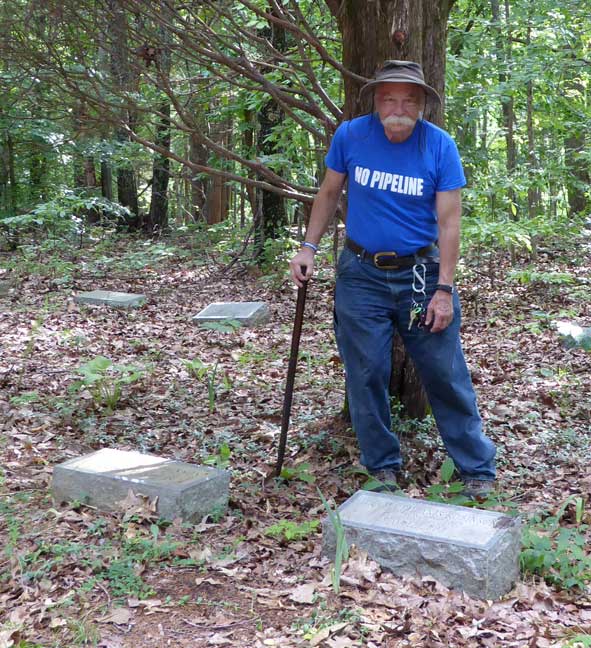 Quinn Robinson amid his ancestors’ gravesites on his property, which, if approved, would be spanned by the 42-inch Atlantic Coast Pipeline.

A Buckingham County landowner says Dominion violated its own agreed-to survey process in work on the proposed Atlantic Coast Pipeline while the firm contents it followed the policy.

Quinn Robinson, who owns 70 acres near Andersonville — which the 42-inch natural gas pipeline would span of approved by the Federal Energy Regulatory Commission — alleges that a majority of the survey crew members performing work for the pipeline on his property on May 17 wouldn’t display a photo ID on or off video camera.

According to a video Robinson recorded, only two displayed their IDs when asked.

According to Robinson, during a survey process hearing in Buckingham Circuit Court, Dominion agreed that all Atlantic Coast Pipeline representatives on private property would wear visible ID tags.

Dominion is the lead firm proposing the pipeline — one spanning from West Virginia to North Carolina. As part of the project, Dominion is proposing a 53,515 horsepower natural-gas fired compressor station on Route 56 between Union Hill and Shelton Store roads.

“This was their stipulation,” Robinson said, “and I considered it in terms of an agreement that was made in court.”

“There is no legal requirement that the surveyors carry ID badges,” said Dominion spokesman Aaron Ruby. “However, we voluntarily adopted a policy requiring all of our employees, all of our contractors performing surveys to carry ID badges.”

“We do not require, and honestly, we don’t expect that they should have to display their ID badges on camera,” Ruby said. “They’ve got important work to do, and they’re just trying to do their job. If they don’t feel comfortable with having their names and IDs videotaped and posted on social media, then we have to respect their decision.”

Ruby said all survey crew members “on that property were carrying their IDs, with an exception of a couple recent hires who had not received their badges yet. And, when our lead land agent on the site learned that these individuals did not have their ID badges, he instructed them to leave the work area and they did not continue to perform the surveys.”

He said the safety and security of employees and contractors was “paramount.”

If a landowner requests to see crewmembers IDs, they need to show them, but not on camera, Ruby said.

“I went out and said ‘Hello’ and ‘I was the landowner and I wanted to see what was going on,’” Robinson said about the day of the surveying. “This Austin Russell, who was with Doyle, he was waving the copy of the court order from Judge (Donald) Blessing … There were conditions.”

In Robinson’s video, two men showed him their IDs.

“Yeah, but I ain’t going to show you with the camera on,” one man told Robinson in the video. “You don’t need my name,” the surveyor said.

“That’s completely false,” Robinson said of Dominion’s assertion that only two didn’t have their IDs. He said there were about nine people on his property surveying.

“As far as I know, none of them left during the course of the day … One man had a tag … It wasn’t visible in any way. And none of the others would provide them.”

Robinson said he was filming with his camera most of the time he was interacting with the surveyors.

“It was my property and I still have the right film them. …”

“I wanted to know who they were,” Robinson said. He said he’s undecided on his actions regarding the incident going forward. “It’s trying to determine who was ultimately responsible.”

“The last board (of supervisors thought) there was some jobs,” Robinson said regarding the pipeline. “The county sold us out to the lures of tax money. We were expendable. We were sacrificed. And that’s despicable. To me, it shows desperation and a lack of planning. I think Dominion came here, to this area, because you’ve got lots of old people, undereducated people without the resources to fight it. They didn’t go through Albemarle, big surprise.”

He said putting the pipeline was like going back to “harvesting whales for oil. We have a better way of doing this.”

Said Ruby: “All the other personnel on that property on that day had their IDs, but they did not feel comfortable displaying their IDs on video camera of have it posted … on the internet. I’ve got to respect their decision … You have to understand the position our surveyors are in. They are there to work and perform their jobs.”

“Mr. Robinson’s principal complaint is that Dominion told him in no uncertain terms that its survey crews would have visible picture-identification tags,” said Stephen Clarke, an attorney with Waldo & Lyle, P.C., representing Robinson. “And when Dominion went to court to get an order allowing it to enter for survey purposes, it showed the judge that survey process form and told him that was what its crews would be following. It’s wrong for Dominion to tell the court that all of its surveyors will have photo identification in order to get the court to rule in its favor, and then, once it gets a good ruling, go out into the field and immediately renege on that assurance.”