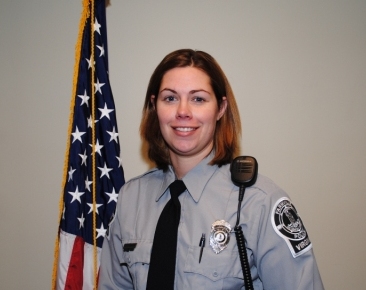 Candice E. Ragland served as an officer with the Farmville and Blackstone police departments.

A former Farmville and Blackstone police officer has been ordered to pay $74,563.15 in restitution to the Bacon District Volunteer Fire Department in Charlotte County after pleading guilty to three counts of felony embezzlement.

Candice E. Ragland, of Keysville, entered guilty pleas to three of six counts of embezzlement of over $200, according to John Bateman, an assistant commonwealth’s attorney in Amelia County who was appointed special prosecutor. As part of the plea agreement, Ragland was not prosecuted on three of the charges.

Ragland will spend two months in a home-incarceration program, according to Bateman. She was sentenced to 15 years, with 14 years and 10 months suspended.

Bateman said Ragland requested home incarceration “and the judge granted it based on the argument that was made by counsel there in court … She’ll have to report to jail, but she’ll probably be fitted with a monitor there at the jail and then be sent back home.”

“The charges stem from a criminal investigation into allegations of embezzlement involving the Bacon District Volunteer Fire Department from back in 2011,” Geller said. “The investigation was conducted by and arrest made by the Virginia State Police Bureau of Criminal Investigation’s Appomattox Field Office.”

The guilty pleas were entered July 20 in Charlotte Circuit Court.

Ragland was introduced to the Farmville Town Council by then-Police Chief Doug Mooney on June 13, 2012, according to town council minutes. The minutes cite her former service at the Blackstone Police Department.

According to Farmville Police Chief Curtis Davis, Ragland was employed as an officer with the department from May 2012 to June 2014.