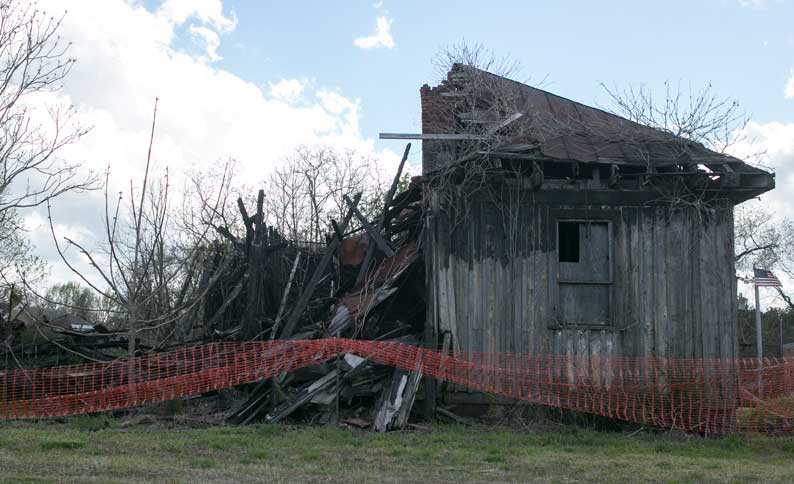 The Prospect Depot will soon be rebuilt. (Photo by Carson Reeher)

Long-awaited renovations to the Prospect Depot are set to begin by early fall.

Prince Edward County Administrator Wade Bartlett said that the six parties involved in the project are close to agreement after two years of discussion about needed alterations to renovation plans, including details about what type of materials will be used for construction.

The depot is located on land owned by the Virginia Department of Conservation and Recreation (DCR) between between Prospect Road and the High Bridge Trail State Park.

The project began in 1998 under the leadership of the Prospect Historical Society, but is now managed by several state, federal and local organizations.

The Prospect Historical Society, Prince Edward County, VDOT, DCR, the Virginia Bureau of Capital Outlay Management (BCOM) and the Virginia Department of Historical Resources (DHR) are collaborating on plans for the dilapidated structure.

Original contractor bidding on the project took place in December 2013 after historically accurate architectural plans were agreed on.

However, bids came in higher than the available funding, so modifications were made to the plans and bidding had to be re-opened.

“The Department of Historical Resources(DHR) and the Federal Highway Administration (FHWA) … require it to be built as authentic as possible,” said Bartlett. “It’s taken us two years to get everyone to agree that we can use modern materials.”

According to the Memorandum of Agreement (MOA) created by the agencies involved, the Enhancement Grant Funding Agent and the FHWA, “The construction will be implemented using readily available modern materials.”

Prince Edward County has approved the MOA and they are awaiting signatures from other parties. The board of supervisors agreed on the document during its June 14 meeting.

According to the MOA, the new depot will have the same footprint as the original with the addition of two bathrooms, a janitor’s closet and a mechanical room at the east end of the building.