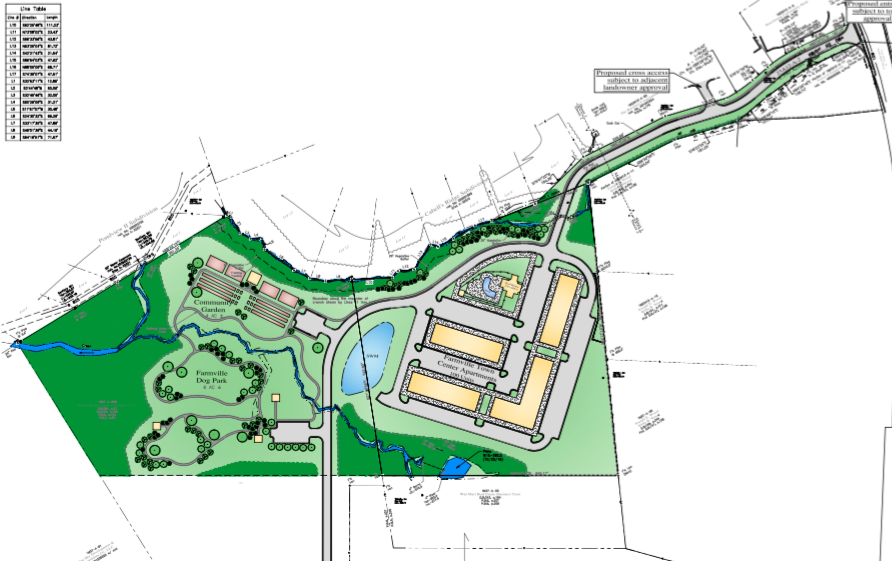 TOWN OF FARMVILLE On a 5-2 vote in July 2016, the Farmville Town Council approved a conditional use permit, allowing Farmville Associates LLC to build a 100-unit apartment complex between Walmart and the Greens South subdivision. For the South Main Street entrance, council said the project could either use or developer Russell Harper’s land, as shown in the graphic, or town property. Council rejected Harper’s offer of donating 10 acres to the town for community use, as depicted in the graphic.

On a 5-2 vote Wednesday, the Farmville Town Council granted Farmville Associates LLC a conditional use permit to construct a 100-unit apartment complex between Walmart and the Greens South subdivision.

The action, which was opposed At-Large Councilmen Dan Dwyer and Tom Pairet, came on a motion by Ward B Councilwoman Sally Thompson that the council approve the permit with seven conditions.

One of the conditions included an option for the project’s developer, Russell Harper, to use the deeded entrance to South Main Street that his firm owns. If he uses that land for the entrance, motorists leaving the apartments would be required to turn right onto Main Street. Alternatively, Harper could put the entrance on an acre of land owned by the Town of Farmville to the south of Harper’s property and further away from the Milnwood Road intersection.

If Harper chooses to build the entrance across the town property, there would be no traffic restrictions and he’d have to pay the town for the property used. An entrance there would break a promise Town Manager Gerald Spates made to Willa Wood, the former owner of the land, that it would be used only for a retention pond.

In a May 12 letter to Wood, who recently sold the acre of land to the town for $125,000, Spates wrote: “ … I can assure you that no road or entrance will cross the property. It will be strictly used for a holding pond.”

Last week, a traffic engineer recommended using the town property for the entrance to the complex.

“She never would have sold that land to him and y’all know it,” Jenny Wood, Willa Wood’s daughter, said from the audience as the council deliberated Wednesday night.

The 12 acres that will hold the complex are zoned B4, allowing apartments with a conditional use permit.

The council’s conditions also included rejecting an offer by Harper to proffer 10 acres of land behind the apartment complex to the town for community use.

About 40 people attended Wednesday’s meeting. Eight people spoke against the project during the public-comment portion of the meeting, while two spoke in favor. The eight cited a lack of transparency, the lack of a full traffic study, intent of the purchase of the Wood property, ethics in the process, quality-of-life issues, changes to the proposal and misinformation. The two who spoke in favor of the apartments cited the zoning of the property allowing apartments and Harper’s having contributed economically to Farmville through other projects.

The project has drawn criticism since it was introduced in the spring. After the town’s planning commission recommended approval of the permit with conditions, about 260 people signed a petition in opposition to the project. During a joint public hearing with the council and commission on the project, the proposal drew almost united opposition from citizens. During a community meeting held June 26 by Harper and Ward A Councilman Greg Cole, the project came under further criticism.

Other conditions included the complex not exceeding 100 units; a maximum buffer between the apartments and existing residences using an 8-foot privacy fence facing the Greens South subdivision, along with natural vegetation and/or berms without disturbing the existing buffer; noise and lighting concerns being addressed in the site plan; and continued work to secure alternate accesses to the complex through the Walmart Shopping Center and the Tractor Supply Co. parking lot.

Before the vote, Harper told council members that Tractor Supply has said no to an entrance using its parking lot and that he was continuing to work with Walmart on an entrance there.

“We’re looking at that and looking at a number of points,” Harper said.

Dwyer asked Thompson if she would amend her motion to exclude the use of the town’s property as an entrance from South Main Street for the apartments, but she declined.

“Council has been very diligent over the weeks and months, some of it positive, some of it not so positive,” Mayor David Whitus said before the vote was cast.

Whitus said the council had gone above and beyond in its “due diligence to address all the concerns. Many of us … have worked with the developer to try to make sure every issue was addressed.”

He said Harper assured the council that other property he owns adjacent to the apartments would not be developed for more apartments.

“Out of this entire process that we have been through, I have never been more disappointed in my life,” Whitus said of the community meeting in June, calling the atmosphere a “mob mentality.”

Cole cited concerns from the community that Harper addressed, including the number of units, lighting, buffers, natural vegetation and the offer to donate property for community use.