Boxley to play tennis for H-SC 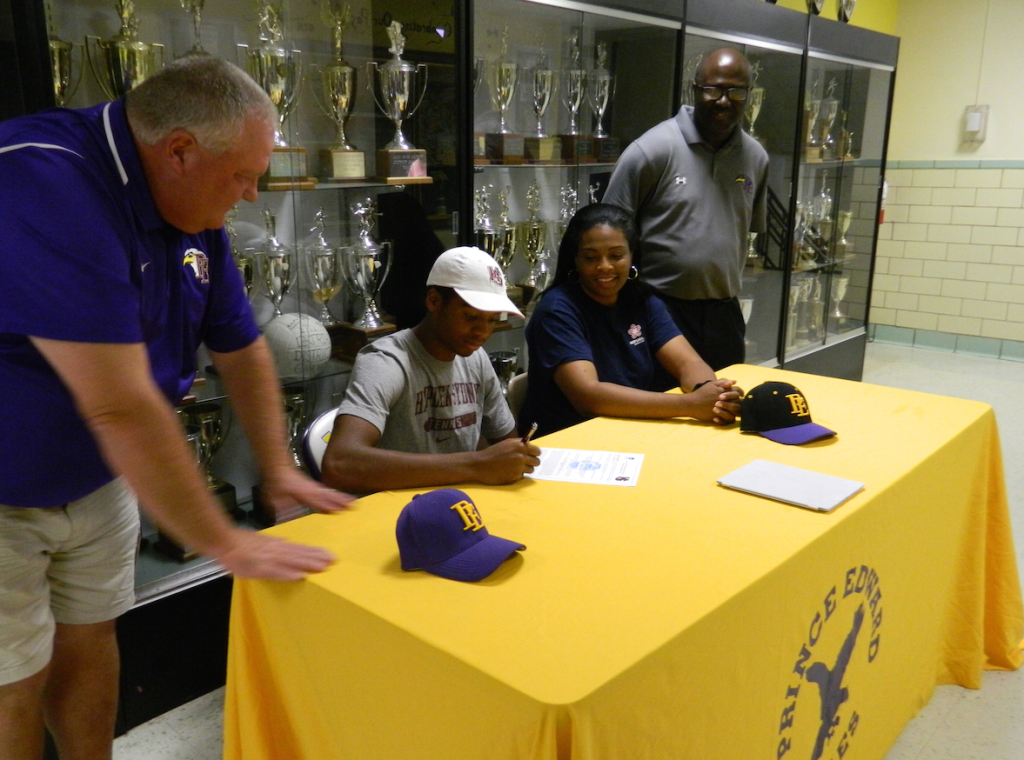 Tennis star Davion Boxley graduated this year from Prince Edward County High School, but he recently confirmed that his time on the court is far from over.

He committed to play tennis at Hampden-Sydney College during a recent signing ceremony at Prince Edward.

Playing tennis at the college level has been a goal of his “ever since I can remember,” he said.

Active in the sport since he was 6 years old, his desire to be on the court has been stoked by watching some of his favorite tennis players, including Rafael Nadal.

“I can’t wait to start,” he said, referring to his college career.

Expressing similar excitement was Hampden-Sydney Head Tennis Coach Robert Bareford, who said, “I think Hampden-Sydney’s a great fit. He is a very intelligent young man, and of course, he is pretty amazing on the tennis court, as well.”

Bareford said he first became aware of Boxley when Gary Rudd, a friend and tennis pro in Richmond, watched him participate in a junior clinic at Midlothian Tennis Club and told Bareford to check him out.

During Boxley’s junior season, Bareford came to watch one of his matches, and “I liked what I saw and just kept in touch with him and came to a couple more matches, and I actually started teaching him private lessons, as well.”

Boxley is a special addition to Hampden-Sydney’s tennis program, in part, because of his athleticism.

“He’s probably the most athletic tennis player that I’ve ever taught,” Bareford said.

Boxley played many sports in high school, and his mother said it was not until his sophomore year that he became serious about tennis and has since played two years of club tennis with the U.S. Tennis Association.

But by the end of his freshman season in high school, Boxley had become the No. 1 player on the Prince Edward team, a status he held for the rest of his high school career.

He managed to achieve all of this with very little formal instruction.

“So, for him to play No. 1 singles and doubles all four years at Prince Edward and be at the level that he’s at now with just basically him playing in his back yard, it’s just incredible,” Bareford said. “Once he does have that day-to-day instruction and then, of course, kids that are better than him to hit with, I’m just really excited to see what heights he can reach.”

When it came to college options for tennis, Boxley said he was considering “two or three, but mainly my decision was between (Virginia Commonwealth University) and Hampden-Sydney.”

His twin sister, Diamond Boxley, is at Virginia Commonwealth on a full athletic scholarship for volleyball, but he opted to go to Hampden-Sydney because it gave him the best opportunity to play tennis.

Though NCAA Division III schools do not hand out athletic scholarships, Boxley said he will benefit from multiple academic scholarships.