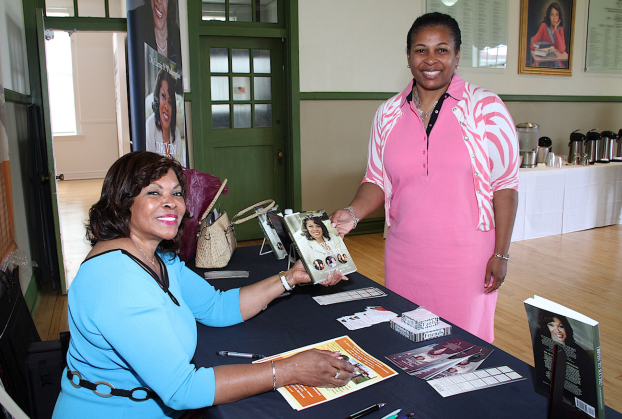 It is divine intervention that has connected the former Meherrin resident to experiences, people and places that have all brought her to her purpose in life.

It is part of the reason her book is titled “Driven To Succeed: An Inspirational Memoir of Lessons Learned Through Faith, Family and Favor.”

It is faith, family and favor that makes Washington a motivational speaker, founder of Aunt Hattie’s Place Inc. boys home, a college professor and an inspirational author.

And some of those lessons and connections she shared during a presentation at the Moton Museum in Farmville Saturday.

She was 11 years old when Prince Edward County supervisors cut off funding to the school system rather than see it desegregated. It was then that she learned that the woman she had always thought her mother was really her stepmother, and was sent to live with a maternal aunt in Norfolk she did not know.

“I instantly became a foster child,” she said. “So I have a kinship for foster kids.”

Again, divine intervention: It turns out that next year will be the 20th anniversary of her Aunt Hattie’s Place Inc. residential group home for young men in Baltimore, Md.

It had been divine intervention that even led to the house. Washington had dreamed about it before she had even seen it.

In her new memoir, Washington reveals how a country girl from Meherrin succeeded through life with optimism, drive and a belief in God to become an honor student, teacher, a parent to two successful daughters and a foster parent to over 100 boys.

She writes about family, relationships and the complexities of growing up during the segregation and desegregation era, and how the strike at all-black R.R. Moton High School led to the historic landmark Brown v. Board of Education case in which the concept of segregated schools was struck down.

She said some schools are using her book in social studies classes because of its extensive information and details about the Brown decision.

Washington wants the story of Moton shared far and wide, and suggested that every school child in Virginia visit the museum.

During her presentation, Washington had members of the audience introduce themselves. Some had their stories of what they endured and experienced when the schools were closed told in the book.

Dr. Barbara Johnson, the newly appointed Prince Edward County Schools superintendent, had her own connections to Washington — supervising the Coppin Academy on the campus of Coppin State University where Washington is a faculty member.

Johnson agreed the story is important.

For Washington, it has been helping children.

“I’ve got a gift, if you will; I know how to raise kids. That’s a gift that I have, so why don’t I write it down and let others learn?” she said. “Some of it is instinctive; some of it is strategic. I don’t care how bad a kid is, they can feel your love. They will put forth the effort if they think that you think they are great. If they feel that you believe in them and you have high expectations they will work for you, and it will work out.”

It all comes down to faith and love, Washington said.

“Love knows no DNA,” she said. “You have to take advantage of opportunities that are given to you, and sometimes you have to make them.”

A $20,000 grant from The Centra Foundation will allow the Burkeville-based Piedmont Senior Resources (PSR) to assist elderly patients with... read more