A learning experience at Longwood 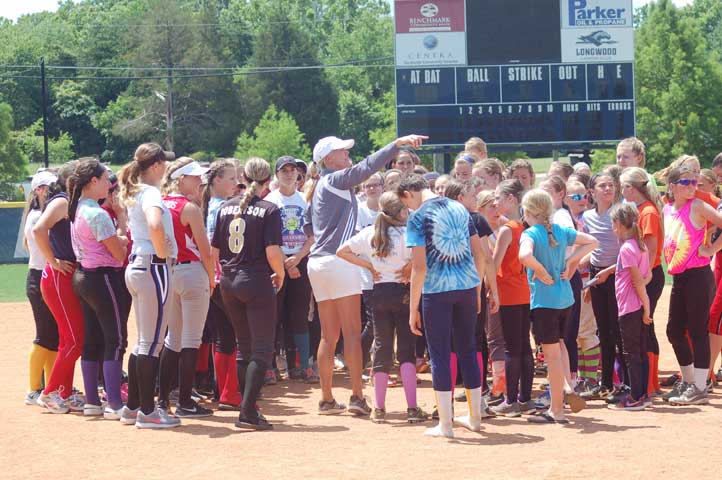 A group of 80 young softball players were recently treated to an intensive three-day learning experience at Longwood University as part of the annual summer camp put on by the school’s softball program.

The campers ranged in age from 8 to 19 years old, and the vast majority of them took advantage of the camp’s overnight option, staying in the Longwood dorms with some of the Lancer softball players who served as teachers and counselors for the girls.

On the final day, Riley said, “It’s gone well,” adding that the organization required to make the event work is “a lot more than people really understand when you have 80 kids, and you’re not only trying to teach them the game, but you’re concerned about safety and you’re dealing with the heat and schedule and rotations. It’s a lot going on.”

Campers come with a diversity of backgrounds, “and you’re trying to teach them with a lot of different teachers,” Riley said. “So just the amount of things that could go on, for it to go fairly smoothly is pretty important.”

The campers were broken up into age groups — 15-19, 13-14, 10-12 and a small group of younger players — and also divided to work at different stations designed to hone their skills in a particular facet of softball.

The girls had their knowledge of the game expanded.

“I learned how to make myself quicker, how to think about the game as kind of like a math problem, and it just makes the game a lot more fun, because you can make plays that you never would have made before,” said 17-year-old Caitlyn Smith, of Bristow.

Danielle Calloway, a rising senior at Brookville High School in Lynchburg, said, “I learned, with my hitting, to kind of slow it down a little bit, think more about my technique.”

A key part of the learning experience for some campers comes at night.

“We have a 9-year-old staying overnight, so sometimes it’s their first time being away from home,” Riley said.

This can be a difficult transition for some girls, “and so that’s where our counselors really become a very important part of whether we’re able to do a good job,” Riley said.

By interacting and developing relationships with the girls, the counselors smooth that transition.

Krista Kelly, a starter and rising junior with the Lancers, was working the camp for the first time after having been a participant at the camp two years ago.

“Being in their shoes once helps me to know what they’re thinking,” Kelly said. “When Coach Riley gets out there, I know they get all nervous and stuff, and (I’m) trying to calm them down and tell them it’s OK if you make mistakes and stuff like that.”

Kelly’s favorite part about the camp was seeing the transformation some of the campers went through.

“I’ve been working with defensive techniques, and so we’ve just been dealing with footworks, and it’s really cool to see — from the first day to the last day — the kids making insane improvements,” she said. “Just from Monday, they looked like they never picked up a softball before to now they look like they could play (Division I )softball.”