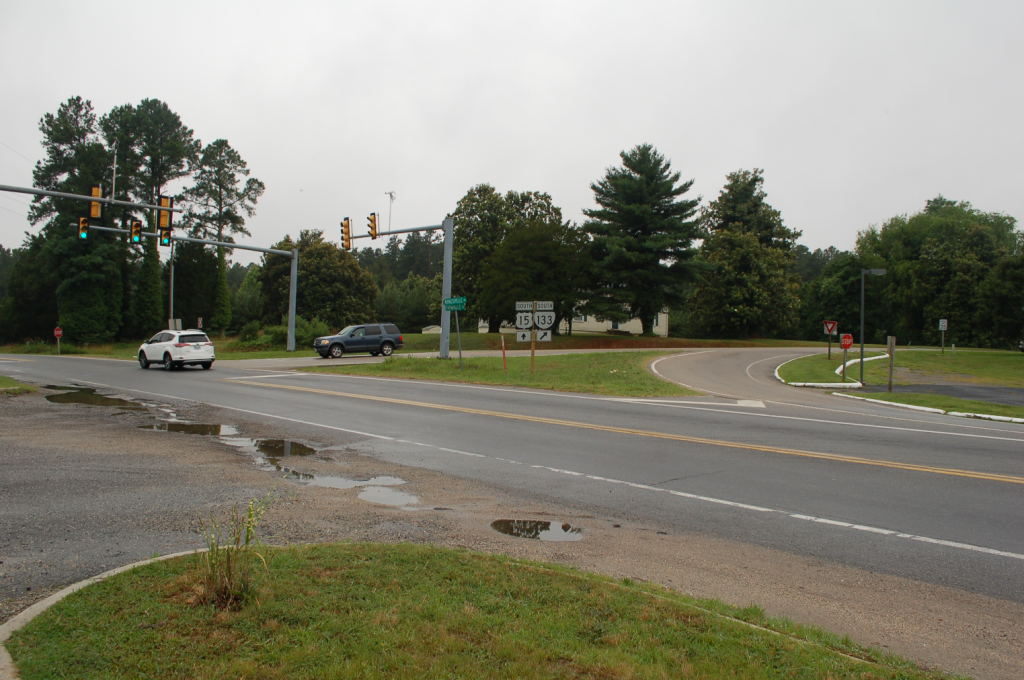 State funding for a roundabout at the intersection of Routes 15 and 692 at Kingsville south of Farmville has been approved. (Photo by Jordan Miles)

Five roadway improvement projects — three in Prince Edward and two in Buckingham — have been allocated funding by the Commonwealth Transportation Board using the state’s new Smart Scale process.

The projects total over $16 million.

Formerly referred to as House Bill 2, Smart Scale is a prioritization process that evaluates each project’s merits using key factors, including improvements to safety, congestion reduction, accessibility, land use, economic development and the environment, according to VDOT.

“In selecting which projects to submit for funding under the … process, Prince Edward County concentrated on projects that would improve traffic safety for our citizens,” said County Administrator Wade Bartlett. “The three projects submitted represented three of our most dangerous intersections. Our focus on safety improvements proved to be wise in that all three of our projects scored well and were selected to receive funding.”

According to VDOT, left and right turn lanes will be constructed on Route 15 at Sheppards and on Route 60 at the Route 56 intersection.

In Prince Edward, the intersection of Routes 460 and 307 will be reconstructed. Route 15 will see left and right turn lanes at the intersections of 655 (at Worsham) and a roundabout at 692 at Kingsville.

Out of the five projects, the Route 460 and 307 intersection ranked highest at 61.4 points. The lowest-scoring project was the Worsham intersection project.

Prince Edward’s top priority was the intersection of Routes 460 and 307, Bartlett said.

“It serves as a commuter and freight corridor to the greater Richmond area. It is part of a regional network and the proposed improvements address safety concerns identified in the Prince Edward County Rural Long Range Transportation Plan. Over the years, there have been numerous accidents at this intersection with more than one ending in a fatality. The improvements will greatly improve sight distance and other safety issues which will reduce the number of accidents in the future,” he said.

The county’s second priority was the Kingsville intersection, where a roundabout will be constructed.

“The project involves the construction of a roundabout with pedestrian crosswalks and access management to improve traffic flow and address safety concerns,” Bartlett said. “The three existing businesses located at the intersection generate a considerable amount of vehicular traffic, all entering onto (Route 15) in a haphazard and dangerous manner. Pedestrians are often crossing (Route 15) at night to enter the Fishin’ Pig. The current configuration of the intersection doesn’t provide a safe way for the public to cross this busy thoroughfare.”

Route 692 also serves as the primary gateway to Hampden-Sydney College, he said.

“The traffic generated by the college, especially when major events are held, greatly exacerbates the congestion and increases the risk to our citizens. This project will alleviate many of the safety concerns and will have the added benefit of improving the aesthetics of the area and easing congestion. These safety concerns were also identified in our Rural Long Range Transportation Plan.”

Bartlett said the intersection at Worsham has a history of accidents and fatalities.

“Site distance is poor and the traffic entering (Route) 15 from the existing business greatly increases accident probability. The proposed turn lanes, warning signage and pavement markings will increase safety to our traveling public.”