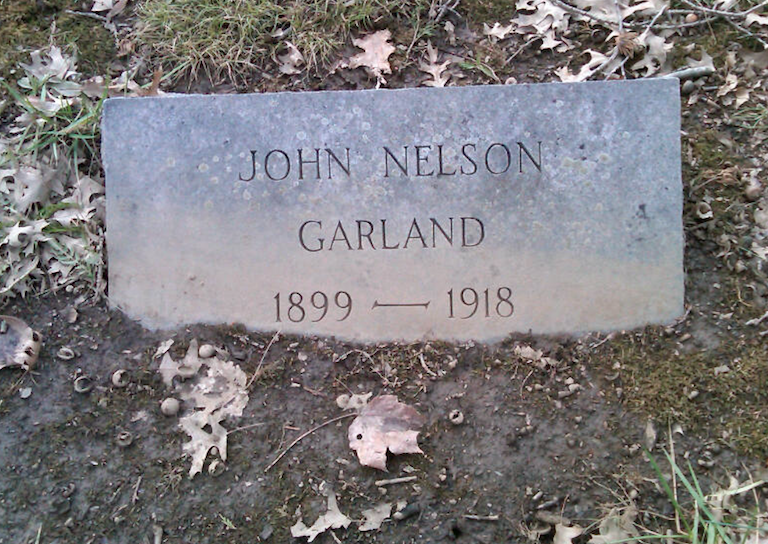 EDWARD DUNN Pictured is the headstone of Jack Garland in Westview Cemetery. Although there are 46 World War I headstones in Westview, Jack does not have one.

Second in a series

On Labor Day in 1919, Farmville staged a welcome home reception for “Colored Troops.” A “spectacular parade started at the Public School on South Main Street” and wound its way around the whole town, ending at First Baptist Church where, after singing “America,” prayers and patriotic speeches were given. Hundreds lined the parade route to see the many floats and “Mayor Paulett and the members of the town council stood to honor Lt. Hilton and his dark-skinned warriors” as they marched past the reviewing stand on Main Street. At the close of ceremonies, the soldiers, led by the Oxford Band, marched to the Armory where they were served dinner by the Home Coming Reception Committee. (The “Public School on South Main” was torn down about 1926 and was replaced by what we now call the Mary E. Branch Community Center.) 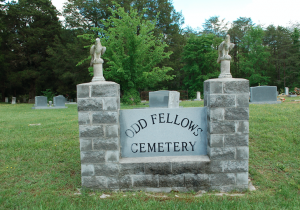 World War I memorial services were held at Odd Fellows Cemetery by the Mothers’ Council on Memorial Day 1920, 1921 and 1922. The graves of three soldiers who died in the war were decorated in 1922.

By the spring of 1920, when no public ceremony had been held to honor our fallen heroes, black or white, the Mothers’ Council of the black community decided to act. “A memorial service was held at the colored cemetery (now Odd Fellows Cemetery) May 31 in honor of our heroes who made the supreme sacrifice in service in France.” The Rev. Jacob Randall read the scripture and P.W. Watkins, master of ceremonies, introduced N.M. Griggs, who spoke in glowing terms of what this day should mean to every American. Although their bodied were still in France, “the names of the soldiers were inscribed upon a plain board” erected in the cemetery at the grave of one who died on his way home — James D. Miller. The Excelsior Band, making its first ever appearance, played, and a choir sang “Nearer My God To Thee,” while American and service flags floated gently in the breeze.

In late 1920s the French lifted the ban on the removal of bodies and the families of the American deceased were asked whether they wanted their bodies left where they were or returned for reburial. The result was that the remains of 46,000 boys were returned for reburial in America and 30,000 were left in American military cemeteries in France.

The first “official” meeting that we can document of Farmville’s American Legion Post 32 was held on March 8, 1921, and by this time the membership had grown to 58, with a goal of 100. This meeting took place at the Masonic Lodge, corner of Main and Second Streets. Up to now Post 32 never had a permanent home where they could house their furniture (e.g., two pool tables) and hold their weekly meetings. So it was with excitement that they announced that they had secured a permanent meeting site on the third floor of the Chappel Building on Main Street. They met there for the first time on March 30, 1921. In the early years they retained their military bearing, e.g., on April 3, 1921, they met as a group on Sunday night and marched “in a body” to the Farmville Baptist Church to hear a special sermon.

The week of Memorial Day 1921 the Women’s Auxiliary of the American Legion began selling the “Blood Red Poppies of Flanders Field.” For the first time in Farmville, every man, woman and child now had the “opportunity to show their respect for the men who sleep on foreign soil by wearing one of these poppies on Memorial Day.”

The Mothers’ Council had their own plans for Memorial Day. On May 30, 1921, at Odd Fellows Cemetery, they held their second “memorial service for those who gave their lives for America in the World War.” This time many more people came and speakers, both black and white, made brief addresses while patriotic music played softly in the background. A year earlier it had been stated: “In the very near future we hope to place a fitting monument at the soldier’s grave.” But nothing “concrete” had yet been done.

American Legion Post 32 was still without a name. Rules stated: “No post can be named after a living person. In Virginia most of the Posts will be named after soldiers or sailors, of the particular neighborhood, who lost their lives in the war.” Post 32 was about to get its name.

On August 13, 1921, the body of John Nelson “Jack” Garland arrived in Farmville in a beautiful metallic casket. On August 14 the casket, draped with an American flag, was escorted by members of the Jack Garland Post of the American Legion, recently named for the deceased. Legion members were dressed in full uniform representing every branch of the service. Members of other posts who were wounded by shrapnel from the same shell that killed Jack were in attendance. Jack’s buddies from the old Farmville Guard were also present. He was buried with full military honors, including a 21-gun salute and the playing of Taps. Jack was not the first World War I veteran to be reburied locally, but he was the first one buried with full military honors.

When the Farmville Guard was reorganized in 1921, it became Company G of the 116th Regiment of the Virginia National Guard. If this sounds familiar, it should. During World War I, the old Farmville Guard had been a part of Company G, 116th Regiment, 29th Division. They wished to preserve the name of the unit that had served with such distinction in France.

Sgt. Wiltshire C. Davis (1895-1974), Prince Edward County’s most decorated soldier of World War I, was a member of this distinguished unit. The son of Andrew Jackson Davis (1867-1943) of Farmville, he was awarded a Distinguished Service Cross by the Americans and a Croix de Guerre by the French for “heroism above and beyond the call of duty” on October 11, 1918, north of Verdun. “After the loss of all of his officers, his company was becoming disorganized. Sergeant Davis took command and reassembled the company, bringing it to its objective. He commanded for a period of 11 days thereafter and successfully continued the operations by his leadership and exceptional courage under fire.” Father and son are buried in Westview, but there is nothing on Wiltshire’s headstone about his World War I service.

Armistice Day (November 11) was not celebrated in Farmville in 1919 or 1920 because it wasn’t officially proclaimed a public holiday by the governor until October 29, 1920. By 1921 the Jack Garland Post was ready to make up for lost time. They organized an Armistice Day parade, headed by the Farmville Silver Band, which started on North Main Street and ended at the Confederate Monument, because there was no official World War I memorial in Farmville. Speeches were given after which a dinner was held honoring all “ex-servicemen of Prince Edward and adjoining counties.”

By Memorial Day of 1922 there were three graves of fallen heroes in Odd Fellows Cemetery — William M. Baker, John D. Miller and Thomas Evans. Thus, on May 30, the Mothers’ Council “decorated the graves of the three soldiers who gave their lives in the great World War.” The main speaker was Dr. C. Edward Burrell, author of “History of Prince Edward County, Virginia (1922).”

It was stated: “The colored people have begun to raise money to erect a monument in the cemetery.” But, as far as we can tell, nothing was ever done and the 1920 “plain board” upon which the names of the soldiers were inscribed simply rotted away. (By now you are probably wondering what the Mothers’ Council was. It was a group of local black married women who met “to discuss household matters.” In 1921 Martha E. Forester (1863-1951) was president and Kate Wiley (1882-1952) was secretary.)

On Labor Day of 1925 Jack Garland Post 32 “invited every ex-service man in Prince Edward and adjoining counties to bring their family and basket lunch for an all day festival” at the new Farmville Lake Park. This included water sports, games and a round table discussion of experiences from the war. The day concluded with a “gigantic display of fireworks.”

NB: Tuberculosis (TB), a communicable disease, which was not an issue in Farmville before the war, became an issue after the war. TB was screened for when the draft began in 1917, and the examiners erred on the side of caution, sending boys packing when all they had was a slight cough. Nevertheless, too many WWI soldiers returned home with full-blown TB. Tommy Evans returned in 1919 with TB. By 1920 there were 1.3 million known cases nationally (23 in Prince Edward County) and TB clinics became routine in Farmville. Evan’s 1921 obituary states: “As a result of his army service the disease which caused his death developed.” He was buried in Odd Fellows Cemetery. (His name was written “Tommy Jordan” in his obituary, “Thomas Evans” on his tombstone and “Tommy Evans” on his draft card.)