Under the eastern skies: Brown reflects on roping bucking bulls 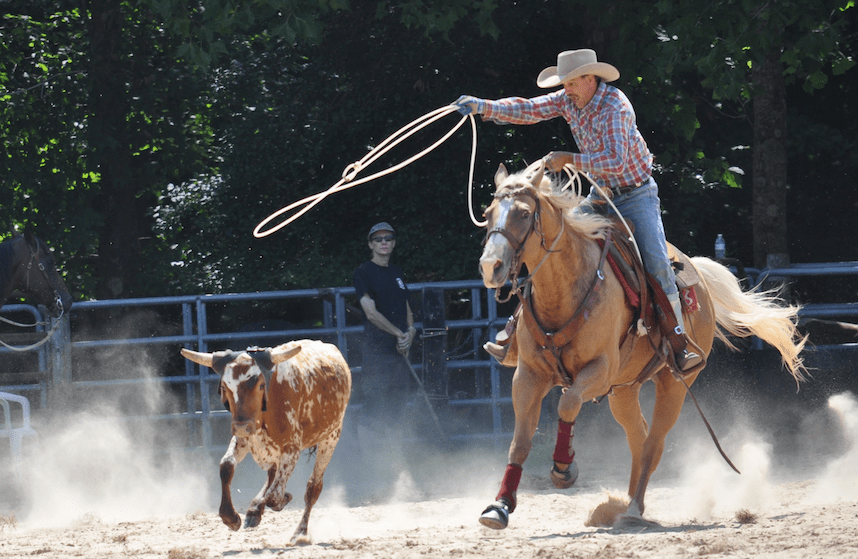 MARY HUDDLESTON Jerry Brown, who owns the Bucking B Ranch in Buckingham, ropes a calf. Brown is one of three people in Virginia with the unique talent to rope problem bucking bulls at Professional Bull Riding events and rodeos.

Behind the gates of Bucking B Ranch in Buckingham County lies a humble cowboy who lives a life reminiscent of the old American West.

“I always wanted to be a cowboy,” Jerry Brown said, as he walked into his two-story log home decorated with cowhide rugs and infused with the smell of leather. “I love the cowboy lifestyle.”

Spending his life on top of horses under the sun has permanently tanned his skin to a deep mahogany.

Brown is one of three people in Virginia with the unique talent to rope problem bucking bulls at Professional Bull Riding events and rodeos.

“My job is to stand in the arena on horseback,” Brown said. “I am the second line of defense if the cowboy is unable to leave the pen after his go on the bull.”

The first form of protection for a bull rider is a bullfighter in the arena who grabs the attention of the bull once it bucks the rider off. If the cowboy is hurt in any manner that does not allow him to move out of harm’s way, it is vital the bull be kept away from the injured cowboy. This is when Brown steps in.

“It is very important for me to get to that bull as quickly as I can to protect the cowboy so the bull rider can be attended to,” he said.

If the bull does not leave the pen after bucking off his rider, it is Brown’s job to rope the bull and drag it out of the pen.

“I would say on average 25 percent of them do not go back on their own,” he said.

According to Forbes’ list of most dangerous sports, bull riding ranks third. Bucking bulls weigh an average of 1,800 pounds and are selectively bred to be incredibly muscular and dangerous.

“I have seen many cowboys break a leg or be knocked unconscious,” said Johnny Ewers, longtime horseman and Brown’s friend. “Those bulls are big, unpredictable animals, so there is a chance you or your horse could get hurt, too.”

At a PBR event in 2008, a bull charged Brown and flipped his horse out from under him, causing the horse to land on top of him. While he was lying on the red arena dirt with a shattered right leg, the first question Brown asked, as all cowboys would, was if his horse was OK.

Doctors performed extensive surgery on Brown’s leg that required the insertion of a rod, plates and screws.

“It has been the closest call I have had while working with cattle,” he said.

Brown also broke his back at the age of 23 while working cattle on a friend’s ranch in Montana.

“I have been hurt a couple times for sure, but wouldn’t trade it for nothing,” Brown said.

However, life has not always been so pleasant and exciting for the Buckingham cowboy. In 2014, his wife, Melissa, lost her battle with cancer.

The two met in 1994 and instantly connected over their passion for horses.

“We argued the first couple of years about our ways with horses,” Brown said, drawing out each syllable. “But after awhile, we merged our thinking. I learned volumes from her, and hopefully she learned some things from me. We made a great team.”

“Right after she started roping competitively, she told me her goal was to win a belt buckle because you cannot win those in the hunter world. I was super proud of her because she worked hard all year,” Brown said.

Melissa won a belt buckle that year as the high-point heeler for her division.

In the midst of all the photos, Brown has only one picture of him on display.

“Here is my favorite picture,” said Brown as he picked up the priceless photo. “We were standing in front of a big rock mesa near my buddy’s place in Farmington, New Mexico.”

“I am actually wearing the belt buckle that my wife won right now,” he said as he showed a rectangular piece of tooled silver around his waist that read “High-Point Heeler – Melissa Brown.”

Until he joins Melissa again, the American cowboy lives on while wearing a cherished belt buckle he did not win.