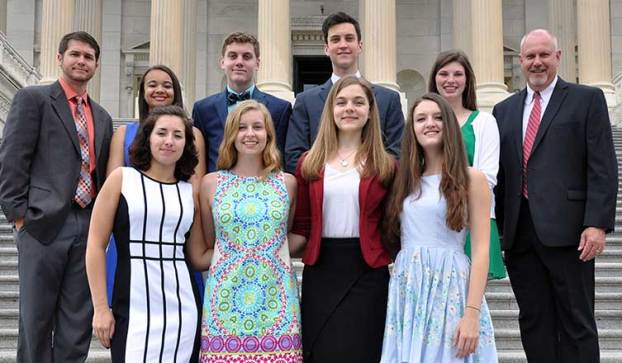 During a visit to Capitol Hill, the students met U.S. Rep. Robert Hurt, of Virginia’s Fifth Congressional District, and enjoyed a guided tour of the U.S. Capitol Building. Students visited Arlington National Cemetery, the Pentagon and the Newseum. They also enjoyed a twilight cruise on the Potomac as well as a Washington Nationals baseball game.

As part of NRECA-sponsored National Youth Day on June 13, students from across the country convened to learn from inspirational speakers, including four-time Paralympic Medalist and two-time wheelchair basketball world champion, Mike Schlappi.

Chipman, who was chosen to represent Virginia on NRECA’s Youth Leadership Council (YLC), will be returning to Washington, D.C. in July for a workshop to develop her public speaking skills.

YLC is composed of one student from each state selected by their chaperones and peers to play an active role in NRECA’s annual meeting in the spring. Since 1964, the nation’s electric cooperatives have sponsored more than 60,000 high school juniors and seniors to visit their U.S. congressional delegations, learn from energy and grassroots government education sessions, and sightsee in Washington, D.C. NRECA is the national service organization representing the nation’s more than 900 consumer-owned, not-for-profit electric cooperatives.

“It was a great opportunity to meet our elected officials and experience our government firsthand,” Chipman said. “We made new friends from nearly every state and toured some amazing locations throughout our nation’s capital. It is an experience I will never forget.”

Honor graduates made up a large portion of seniors who received diplomas in Buckingham recently. Pictured are, from left, front... read more