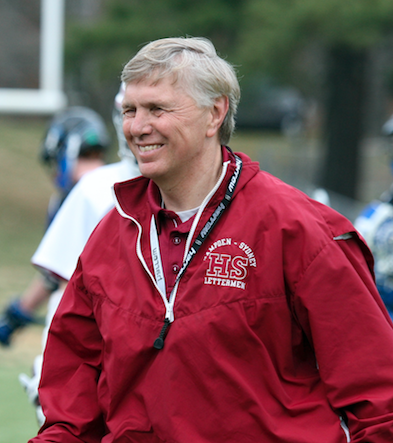 The honors have been coming in for retiring Hampden-Sydney College Men’s Lacrosse Head Coach Ray Rostan.

Most recently, the United States Intercollegiate Lacrosse Association named Rostan a USILA North-South Legend, one of four legends of the men’s lacrosse game featured on the sidelines of the 75th annual USILA/Nike North-South All-Star Games on May 27 in Radnor, Pa.

Prior to that, he was named the Old Dominion Athletic Conference Coach of the Year for men’s lacrosse, while seven of his players were named to the All-ODAC team.

Reflecting on his coaching honor, Rostan said, “I was very appreciative of it. It’s just kind of another nice thing for this season. In particular, our team really was fun to work with. They worked very hard. They had fun together, and I think that was the most rewarding thing was being around this team, coaching with this staff, and the honor of Coach of the Year was just another small combination of a good bunch of kids and good bunch of coaches on the staff and really enjoying my last year.”

The Tigers had a remarkable season, despite having to replace five of its top seven scorers from 2015, along with several starters. Hampden-Sydney tied the program record for single-season wins this year with 13 and also set a new school record for ODAC wins with seven, finishing third in the conference.

In school history, the team’s 339 points and 122 assists this season were third-most in a single season, and the Tigers’ 217 goals were second-most.

“I think it’s a real tribute to Ray what the other coaches think about him and (that they) respect him,” said Joe Bush, a former H-SC athletic director who worked with Rostan for many years. “And I just feel like it’s so well deserved, and I’m so happy to hear that he got it.”

In his 32 years as the Tigers’ coach, Rostan led them to 27 winning seasons and a record of 302-172, including four ODAC Championships.

Bush said one reason Rostan has been so successful as a coach is his dedication to the sport of lacrosse, “but probably the most outstanding characteristic is that he really relates to his players.”

Rostan said having the conference coaches name the sportsmanship award after him was a special thing.

“It’s just a recognition of we’re all in this together,” he said. “I put all my energy into trying to beat certain opponents (in this league). We all have those Darth Vaders in our lives type of thing, and yet in the end, I feel like we’re all in this thing together, and having a great appreciation for each other is pretty neat. So again, having that as an ongoing award, I think, is really something that I’m honored by, I feel great about.”