Rose pogonia: an uncommon orchid in our area 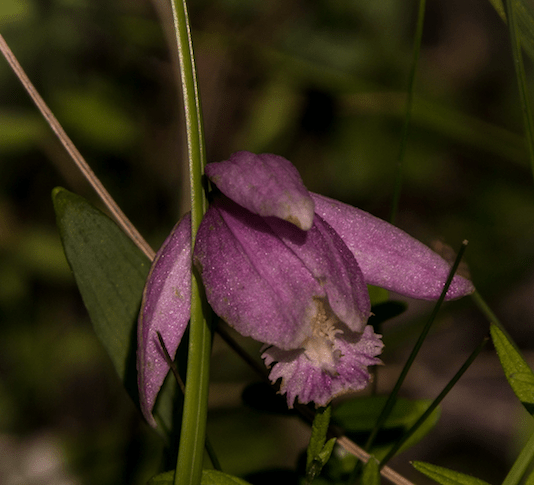 Rose pogonia is a native orchid that’s rare in Virginia.

Robert Frost wrote about a meadow saturated with them and hoped that the meadow wouldn’t be mowed while they were blooming. Frost had found a large colony of rose pogonias or snakemouth orchids, which typically appear in early summer and are stunning. They’re not common in our area, but have been found in nearby Buckingham, Chesterfield, Henrico and Dinwiddie counties. I found my first one in Maine last summer.

Rose pogonias are about 10 to 12 inches tall with a single leaf half way up the stem. The single bloom is deep pink or rose colored with three petals and three sepals that look remarkably like petals. They’re very fragrant.

In fact, they smell just like perfectly ripe raspberries. Like many orchid blooms, the rose pogonia is a complex structure that uses the promise of nectar to attract bees and then tricks them into assisting with pollination. The lower lip has a pink fringe and a yellow beard that resembles pollen.

There are 10 species in the genus Pogonia, but only this one is found in Virginia, and it’s not common.

The rest are native to East Asia.