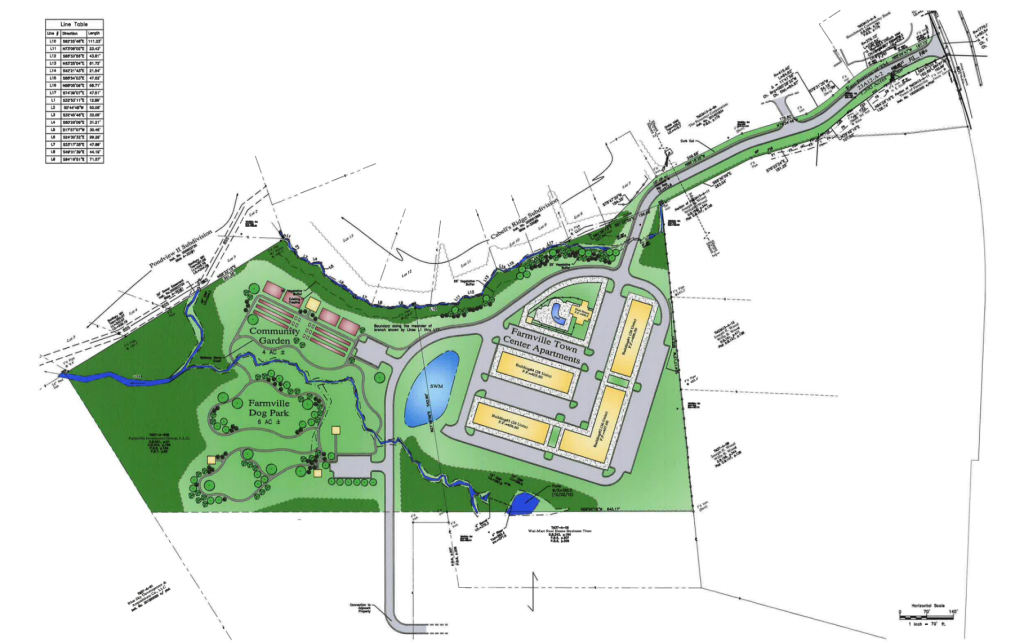 TOWN OF FARMVILLE Three entrances are part of new conceptual plans for a 120-unit apartment complex planned for Farmville between Walmart and the Greens South subdivision. Plans also depict Farmville Associates LLC donating 10 acres of property west of the apartments to the town for community use. The plans were presented to members of the Farmville Town Council Wednesday.

Real estate developer Russell Harper is proposing to add two entrances to a planned 120-unit apartment complex on South Main Street, in addition to donating 10 acres of property behind the complex to the town for community use.

According to a conceptual drawing presented Wednesday to Farmville Town Council members by Harper and Will Allen of Farmville Associates LLC, a new entrance/exit would be located south of the property, connecting to the Walmart parking lot. The second new proposed entrance would be accessible through the existing Tractor Supply parking lot.

The originally planned South Main Street entrance would cross property owned by Harper’s firm. The entrance to the Tractor Supply parking lot would intersect with the original entrance.

The new entrances for the hotly contested project were presented during a continued town council meeting Wednesday morning. Farmville Associates needs a conditional use permit from the council to build the apartments, which would be off South Main Street between Walmart and the Greens South subdivision.

The conceptual design shows an existing vegetative buffer on the north side of the property between the apartments and Cabell’s Ridge subdivision, whose residents have objected to the project.

About 90 people attended a recent joint public hearing of the town council and planning commission, and citizens who spoke were unanimously critical of the project, citing concerns about traffic and other quality-of-life issues.

“We’ve got some additional landscape plantings here, and the buffer is more than 25 feet. It’s somewhere between 25 and 50 feet all the way along the rear of Cabell’s Ridge,” Allen said.

The drawing showed a reorientation of the pool house and changed the lay of the road to circle the periphery, he said.

“We’ve been in discussion with the Tractor Supply, the groups that own that shopping center, about doing a cross-access arrangement. And they seem to be open to doing something there, but we don’t have a formal agreement with them at this time,” Allen said, noting that resolution could be reached on the entrance within the next 30 days.

“Back here, on about 10 acres, we’re showing a community or public space that would potentially be something that we could work with the town on. Some thoughts might be a dog park, a community garden similar to the Tricycle Garden in Richmond … ,” Allen said.

The tract for the apartment complex is 12 acres, Harper said.

“Ultimately, if and when this was to come online, we would potentially be able to extend the road back to the rear of the Walmart Shopping Center,” Allen said of the possible south entrance.

According to Allen, all three entrances would provide for two-way traffic.

“Residents, if and when this park was to be created by the town, could elect to utilize either entrance based on what they’re comfortable with,” Allen said, responding to a question from At-Large Councilman Dan Dwyer about the need for both the Tractor Supply and South Main Street entrances.

The conceptual drawing shows a dog park and a community garden west of the apartment complex — the garden occupying about 4 acres and the dog park about 6 acres.

Where the food from the conceptual garden would go would be decided by the town, Allen said. “What we wanted to do was look at a few things we’ve looked at in other locations that have been successful and just suggest that that might be a potential option to pursue on those sites.”

The project, including the apartments and the community space, would occur in one phase, Harper said.

Mayor David Whitus said that in the community’s “whisper chamber,” it was mentioned that the project would be a “multi-phased project (that would just start) with 120 and it’s gonna grow and it’s gonna be this and that. Can you address that?”

“The 120 units is basically the maximum density that could occur on any of these adjacent parcels,” Allen said.

“We don’t think that the project would be successful unless we have full access there, as Russell had said earlier,” Allen said, responding to a question from Dwyer on a right-turn-only stipulation at the entrance directly on South Main Street.

“Where it would come out, if you’re facing the Tractor Supply, the driveway that goes directly in front of it is what they believe would be the most natural fit, because Tractor Supply has that exterior area. …,” Allen said.

“It’s always interesting to watch a project evolve,” Whitus said. “There’s been lots of conversation about this one. I have said this to many people, including the media, who were seeking comment, now is not the time to comment. We are not there yet. We’re still looking, we’re still exploring. There’s options out there. There’s still a lot of discussion going on. There’s no need to comment. We’ve clearly seen an evolution with this project.”

Responding to a question from Dwyer about the council’s potentially voting on the project on July, Whitus said, “It’s a conversation that’s still very fluid, so we’ll have to see how it plays out. It’s hard to say at this point. I’m sure that council will continue its discussion. Whether they have enough information to make the decision … it’s up to council.”

Harper will host a community meeting regarding the project on Friday at 6 p.m. at the cul de sac at Cabell’s Court.