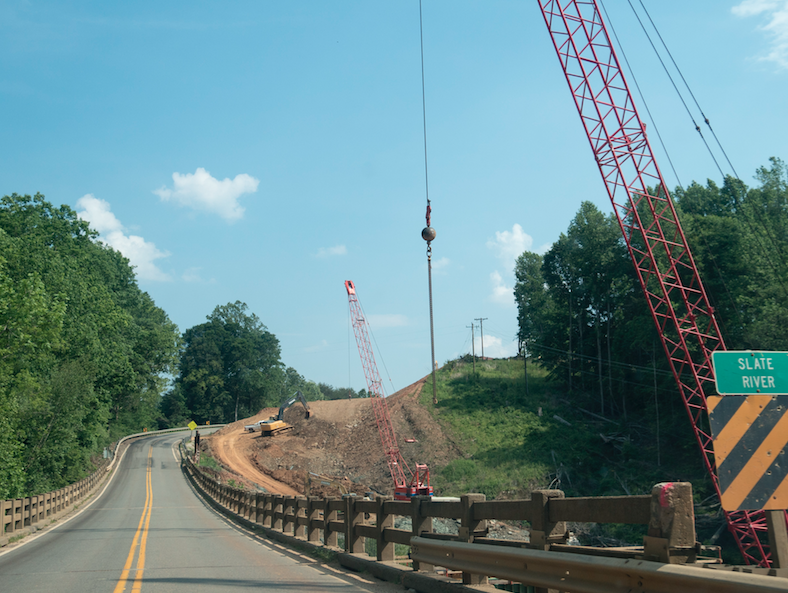 CARSON REEHER | HERALD Construction on Route 20 on the new Slate River Bridge is in full swing and a November 2017 completion date has been announced.

Construction of a new Slate River Bridge in Buckingham County is proceeding according to plans and is expected to be completed by November 2017, according to VDOT spokeswoman Paula Jones.

The nearly $10 million project is located on Route 20, north of Dillwyn over the Slate River.

VDOT has been working through a rainy season to replace the current “narrow bridge” over the Slate River.

According to Jones, the contractor continues to aim for the 2017 completion goal, despite a surge of rain this spring.

VDOT’s Dillwyn Residency Engineer Scot Shippee said, “While the weather may affect the progress of certain tasks on site, I am not aware of any delays to the critical path on the project due to weather or anything else.”

“Most of the bridge-related activities were able to continue through the wet weather. Current activities include: (placing) drainage structures on the north end of the project, placing fill material, tying reinforcing steel for the bridge pier caps, (and) if all goes well, we anticipate pouring concrete for one of the pier caps next week,” said Jones.

The purpose of the new bridge is to help make the roadway safer for motorists, according to VDOT. The existing bridge ranks a 47.9 out of 100 on VDOT’s Sufficiency Rating, making it structurally deficient.

The new bridge will improve on the safety standards and meet current design standards of the old bridge, according to VDOT. It will be constructed northwest of the old bridge and will be approximately 360 feet long and 47 feet wide.