Making the most of what you have 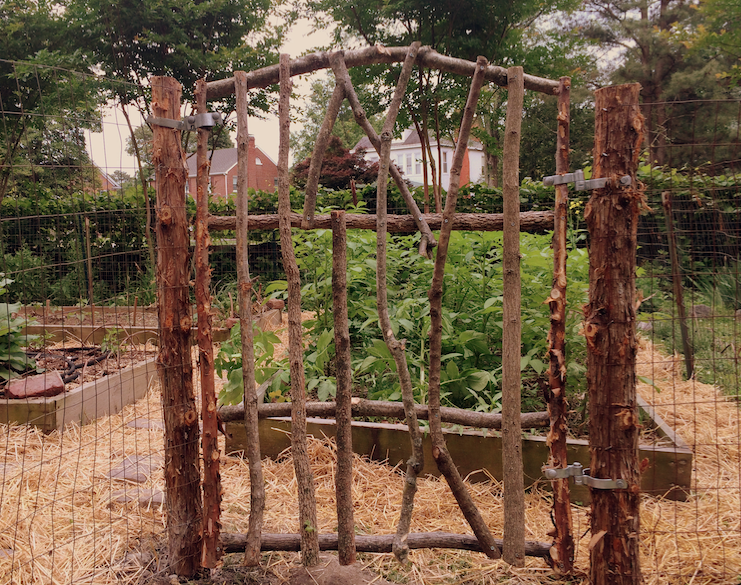 A rustic gate is an easy way to use up garden debris.

May was all about taking a break from garden maintenance and enjoying the parade of azaleas, rhododendrons, peonies and irises. Thanks to the copious amount of rain we got this year, the flowers were beautiful, but the ground was just too soggy to encourage any self-respecting gardener to consider weeding.

And now, June is upon us, and we’re going to wake up one fine morning to heat, humidity, and weeds 6-feet- tall. This progression happens every year, but somehow I have to re-learn it all over again.

So, I’ve been easing back into garden maintenance mode, planting a few things and dreaming about new garden gates.

My first task was to cut back a very large (think 6-feet-tall and about 8-feet-wide) azalea. My plan was to revitalize it or kill it. Nothing to lose. The heavy pruning yielded an enormous pile of large branches, as well as lots of smaller flexible shoots that were two to three feet long. The removal of several cedars yielded even more wood. What to do with all of this debris.

And then I remembered the wattle fences, gates, tripods and wickets that I had seen on my last trip to England.

Wattle has been used there and throughout Europe for more than 1,000 years. During the Middle Ages, portable wattle fence sections, or hurdles, were woven from willow or hazel wood shoots and branches. The fence sections were relatively light weight and could be easily moved around and reconfigured for various needs. There’s a 15th Century French illustration that shows a wattle gate being used to keep animals out of a cabbage patch.

More recently, during both World Wars I and II, wattle was used to shore up the walls of trenches.

Gates made of wattle tend to be free form and have a certain rustic charm. Tripods, which are used to support vines, are equally unique. In the wattle tradition, they’re teepee-shaped bunches of 4-8 sticks bound together at the top and in the middle with vines; sometimes they’re not even bound, just placed in position in the soil.

Wickets are simply lengths of thin, flexible branches bent into semi circles and pushed into the ground. They can be used as a low protective fence or placed over new, tender plants to protect them from marauding German Shepherd puppies or other varmints. And they just look so clever.

A recycling plan began to hatch. The cedars were limbed up and turned into gate posts. The largest azalea and cedar limbs and branches were similarly limbed up and hammered into free-form gates. One has an asymmetrical top, while the other is plainer, mostly sticks going straight up and down. I’ve placed one at the entrance to the vegetable garden and the other in the temporary fence around the new green house. I may weave some grapevines through some of the upper parts of both gates.

Long, skinny, but sturdy sticks were bound together with grapevines to make tripods for growing sugar snap peas and Mandevillas. They’re about 8-feet-tall and majestic, even without a covering of vines.

And while I was in creative mode, I made about three dozen wickets and used them to make a low barrier around some recently planted lavender. I overlapped them about two inches to make the fence sturdier. We’ll see if they deter my overly enthusiastic puppy.

So, for about two leisurely days of work, I got rid of a pile of debris and created two very functional and unique gates, several tripods to support climbing plants, and lots of wickets to protect tender plants. Wattle isn’t a formal look, but it blends in beautifully in cottage style gardens and allows for a bit of mad gardening genius to emerge. Try a small project. You’ll be amazed how simple the process is.