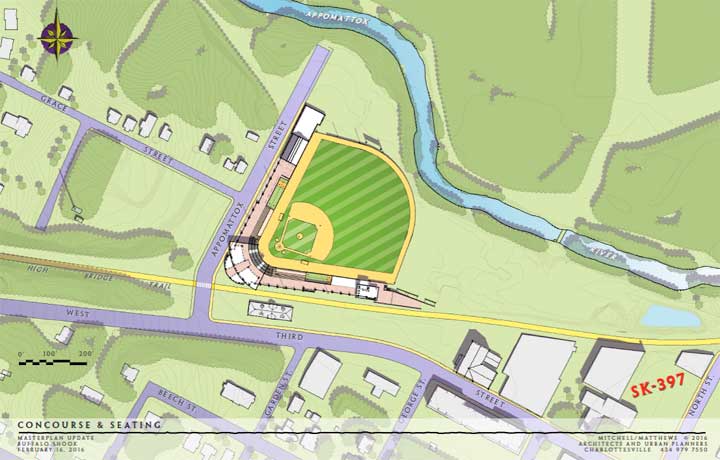 This conceptual drawing conveys the location and general proposed layout of the Longwood Baseball Stadium, which is planned for property on West Third Street at the location of the former Buffalo Shook. Longwood is set to purchase the property from Walk2Campus. (Courtesy of Longwood University)

Longwood University’s plan to build a new baseball stadium in downtown Farmville is in full swing.

Longwood expects to soon purchase the property from Walk2Campus to build the stadium, according to university spokesman Matt McWilliams.

“The Longwood Real Estate Foundation is in the process of finalizing an agreement to purchase land on the former Buffalo Shook site,” he said.

The university’s Master Plan has the stadium pegged for West Third Street across from the Old Train Station at the former site of Buffalo Shook.

In planning the stadium, McWilliams said the university will work with its partners in the immediate vicinity to bring downtown Farmville to life.

McWilliams said Longwood hopes to create “a vibrant new neighborhood” with the project.

“The Master Plan officially looks forward to the year 2025, but a potential baseball stadium would have lasting effects far beyond that date,” said McWilliams.

Longwood wants the stadium to assist with neighborhood development by linking campus and the downtown community, he said.

McWilliams said the university hopes to use the opportunity to engage with High Bridge Trail State Park, the Appomattox River and other recreational entities.

“The idea of downtown baseball quickly caught on with various groups and has moved forward faster than originally anticipated,” said McWilliams. “This is encouraging, but there is still a great deal of work to do regarding planning, financing and design with several area and state partners.”

One of those state partners, High Bridge Trail State Park, has expressed interest in the project.

“I think this will help bring people to Farmville and to the trail,” said Park Manager Daniel Jordan.

He said the trail’s position between the train station and the baseball stadium, in the master plan, could allow people to use the trail to move about downtown and to access the stadium.

“We welcome the traffic,” said Jordan.

“This is a very positive thing for town,” he added. “It will not impede the trail, and we’re not going to be giving any land up, so the trail will not change in size. We’re not decreasing anything.”

Jordan said that project would help diversify the trail.

“This would be a great opportunity to be able to continue to tell the story of the trail and it’s relationship to the town and to the college and everything else,” said Jordan.

The Master Plan also mentions the potential of a minor league baseball team using the field.

“This unique setting could be immensely appealing to a minor league baseball team, whose summer schedule would complement Longwood’s in the spring,” the plan states. “Unlike other sports, baseball teams play as many as six or seven games per week, so the stadium would be in regular and consistent use, attracting visitors who would also shop and eat downtown.”

“Our program is rapidly on the rise, but adding a new ballpark would catapult us faster and further,” Mau said.

He said playing in a top-notch facility only adds to the excitement.

Mau said that he foresees the biggest impact of the stadium being recruitment.

“A brand-new facility would help us greatly in attracting more talented athletes to Longwood,” he said. “It would provide an exciting college sports experience in a beautiful new ballpark, all within walking distance from our many great shops and restaurants.”

McWilliams didn’t release specifics on the size or cost of the stadium.