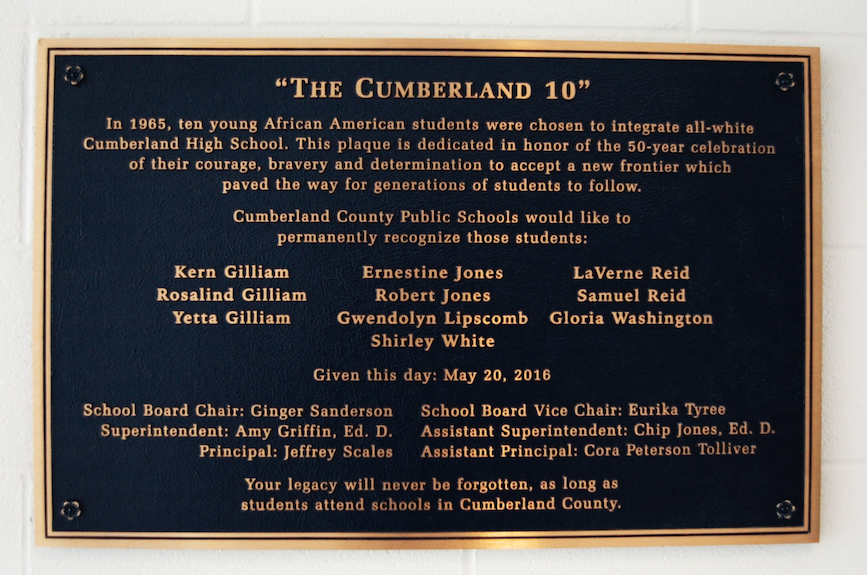 HALLE PARKER | HERALD The plaque installed in the main lobby of Cumberland High School on June 1 honors the Cumberland 10.

Fifty years ago, 10 students made civil rights history just by going to class in a new school. Ten young African-Americans were the first to gain an education in the previously all-white public schools of Cumberland County.

Two of the 10, LaVerne Depte, formerly LaVerne Reid, and Gloria Washington, started at Cumberland High School, then a small two-story building with a gym, as sophomores and remained until graduating in 1968.

Washington died due to medical issues, but Depte, 66, shared her experience as one of two African-Americans in the high school.

“You didn’t have friends; they treated you like you had plague. You had to break down those barriers and you began to have acquaintances,” said Depte of the difficulties of integration initially for the group. “I’ve truly experienced it, not read about it.” 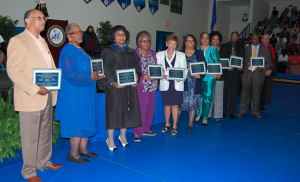 To recognize the strength shown by the “Cumberland 10,” Cumberland High School installed a plaque in their honor on the wall of the main lobby on June 1, having already presented framed copies to the group at graduation on May 20.

Scales said he knew everyone in the county’s first of four integration test runs; the African-American principal was a member of the final one at age 6 before Cumberland’s public schools were fully integrated in 1969.

“I never thought about me going to school as a first-grader as being a part of black history, but looking back and reflecting on it, you really have to give the proper recognition to those that were the first,” said Scales. “That’s why I made an effort personally to make sure that those 10 were recognized for what they did because without them, Cumberland High School’s culture would not be what we have currently. And that’s the truth about it.” 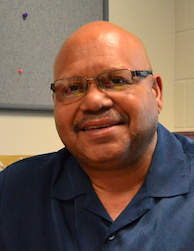 The Cumberland County NAACP branch also honored the Cumberland 10 at a ceremony in the fall, but not all of the surviving members were able to attend. According to Scales, all 10, including the deceased Washington and Samuel O. Reid, attended or were represented by family members.

“To be enshrined in Cumberland High School because of what they went through, what they did to make our school what it is, that’s a legacy,” said Scales. “That’s what I talked about at graduation, living day-to-day are you going to live just for the moment or live for something that’s going to last a lifetime, but you’ve got to make a choice.”

Depte, the eldest of the group, spoke to Cumberland’s graduating class about the past and how the school had changed since she was in their place. She was particularly impressed not only by the marked improvement in academic and athletic success but the diversity of the class sitting before her. It marked her second time returning to the school since graduating.

“The school has grown. It’s not even the same school if you look at the comparison,” she said. “Can you imagine when I went there there were no black teachers, there were two black people in high school and that was it? So, when you look at what changed from 50 years ago until now they have a black principal, how surreal is that, and everyone seems to be getting along.”