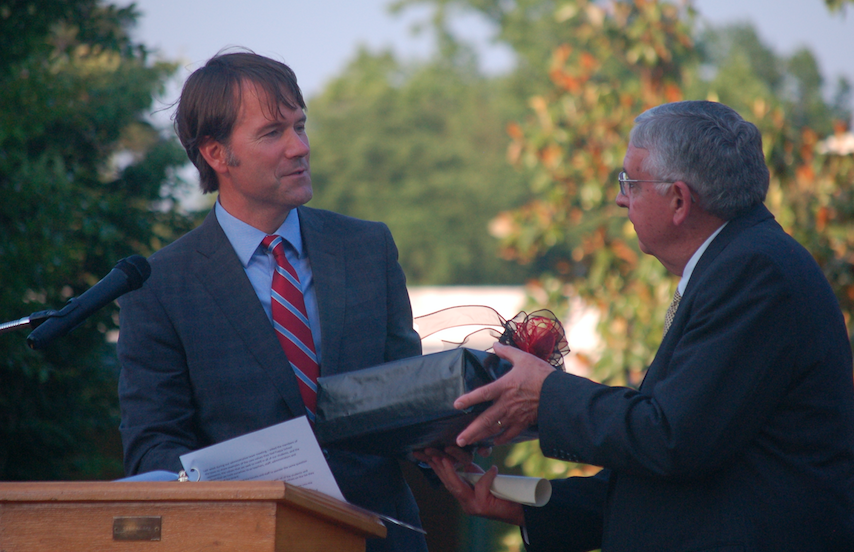 Fuqua School honored businessman Robert “Bobby” Showalter for his dedication and service to the school during its commencement exercises last Friday.

Showalter, who serves as chairman of the Rural Education Foundation, which governs Fuqua School, will retire from the foundation’s board on June 30.

Head of School John Melton presented Showalter, who owns and operates The Carpet House in Farmville, with slate bookends, engraved with the Fuqua Falcon logo.

Showalter was appointed to the then Prince Edward Academy board in 1985, being named board chairman in 1995.

Melton prefaced Showalter’s recognition by stating that, prior to graduation, he asked staff and teachers to describe the values of the school.

“My goal is to identify our common core values, and weave them into the daily life of our school in a purposeful and deliberate way,” Melton said. “In my experience, the path to fulfill a meaningful life is clearer and the temptation to deviate from one’s own moral compass is less vexing when we offer ourselves frequent opportunities to connect with our core values.”

Melton said that Showalter was nominated to the board by Robert Martin and recommended to serve as board chairman by J.B. Fuqua — for whom the school is named and who had an influence on Showalter.

“I most certainly did, yeah,” Showalter said of his enjoying serving on the board. “It (was) very rewarding.”

The longtime chairman and board member said that one of the school’s biggest accomplishments during his time on the board was enrollment and geographic growth.

He said he’ll miss serving on the board. “You can’t (not) miss something that you’ve been doing since 1985.”

“Dedicated is the word I believe most fitting to describe Bobby Showalter,” said Sandra F. Moss, of Buckingham, who has served with Showalter. “I have had the privilege of serving with him on the PEA/Fuqua Board for many years. Always present, always involved, always willing to listen — I have never worked with a more dedicated person.”