Finding a night in the park 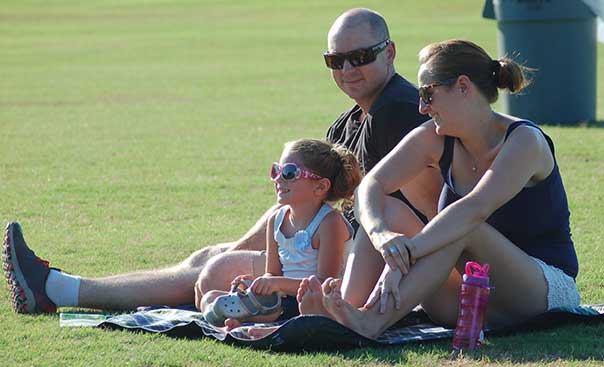 Juniper Shepard, left, watches “Finding Nemo” with her parents, Glenn Shepard, middle, and Ramie Shepard, during the “Night in the Park” event at Buddy Bolding Stadium on Saturday. (Photo by Titus Mohler)

Baseball was not on the schedule, but families in the community showed up at Buddy Bolding Stadium on Saturday in significant number to enjoy a family-themed summer “Night in the Park” courtesy of Longwood University Athletics.

Approximately 155 people congregated in the outfield with blankets and chairs to watch “Finding Nemo” on the outfield video board.

“I thought the event was an overwhelming success,” said Steve Robertson, assistant director of athletics marketing at Longwood. “We had a great turnout from the Farmville community for this being a first-time event. We’ve received tons of positive feedback, and we can’t wait to continue this event in the future.”

The showing of “Finding Nemo” was originally meant to come after a baseball game earlier this year, but it ended up being moved, and the change worked out well as part of Longwood Athletics’ effort to maintain engagement with the public.

“With all of our games and athletic events during the season, we get a lot of interaction with them, and then come mid-May through summer, all of a sudden there’s just nothing,” Longwood Director of Marketing Whitney Curtis said. “And so this is one of our ways of trying to keep that engagement going, continue to build that positive relationship with the community so that come August, they’re still used to hearing from us.”

Kandace McCabe came with her husband, Daniel, and their two children, 6-year-old Lily and 3-year-old Patrick. She noted it was “just something different to do with the kids. It’s outside. It’s a great time of the year for it, so can’t really beat a free movie, right?”

Patrick helped her set up the blanket in their spot in the outfield while the bounce house brought in for the occasion just outside the outfield entrance proved to be the perfect diversion for Lily.

“She is a bounce house queen,” Kandace McCabe said. “She loves it.”

As Glenn and Ramie Shepard watched their daughter, Juniper, play one of the lawn games set up, Ramie Shepard approved of the “Night in the Park” event when she said, “It’s pretty neat. It’s a good thing to do on a hot day with nothing else to do,” and Glenn Shepard added that it helps “get the kids socializing.”

Jill Dickerson said it was her grandchildren who brought her out to the park.

“They’re so excited they can’t stand it,” she said.

Four-year-old Gabriel Wickizer and 3-year-old Aria Wickizer had enjoyed the bounce house and were ready for the movie, sitting down with their mother, Kelly Wickizer, and Dickerson, who noted the benefit of events like this one.

“I think it’s a great thing for the community,” she said. “I think everybody will have a great time here tonight. It’s going to be a good crowd. Weather’s beautiful. It’s a little warm, but it’s beautiful.”

Robertson said he feels events like “Night in the Park” bring people together and create an opportunity for a great atmosphere.

“Longwood University knows the importance of the Farmville community, and we love being able to put on events like these to help show our appreciation for them and their continued support throughout the year,” he said.

Robertson said there are plans to do another event most likely at the beginning of August.