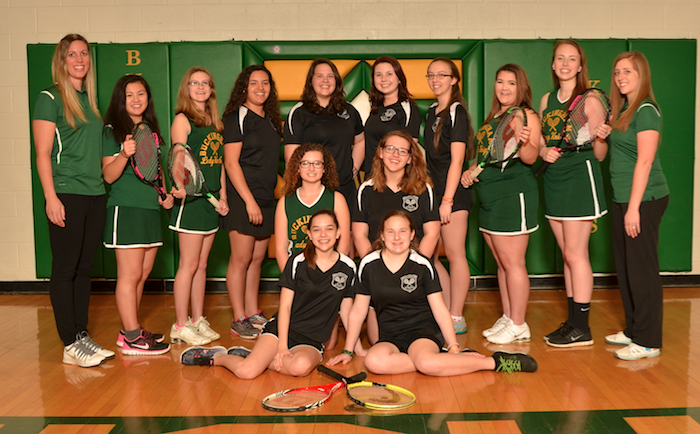 The Buckingham County High School girls tennis team saw its season come to a close on Thursday with a 5-0 loss to Central High School out of Wise in the Region 2A West Tournament semifinals at Virginia Tech.

Lady Knights Head Coach Erin Lake was pleased with the performance that her team put forth.

“They played the best I’ve seen them play all season,” she said, noting they were up against a team with girls who play year-around and benefit from private instruction. “They have a lot more court time, a lot more experience than we do, but we were able to hang with them, and that felt so good. It was an honor to be on the court with them, but to be able to play as well as we did against them, it felt really good. I was really proud of the girls.”

Lake has coached for the Lady Knights for eight seasons, and she said, “This is the first time since I’ve been coach that we’ve made it to the regional semifinals.”

In postseason doubles tournaments, Buckingham’s No. 1 doubles team of Shifflett and Ayala advanced as far as the regional quarterfinals before being eliminated by Gate City 6-2, 6-0.

The Lady Knights finished the season with a record of 14-4.

“We were so proud of ourselves this year,” Lake said. “Definitely improved throughout the season, but they were strong starting out, too, and I think that helped push us through. We had a difficult last couple weeks of the season … and their confidence came from our record.”

Among the standout players on the team were Shifflett.

“She’s the strongest player that I’ve coached yet,” Lake said.

“This is only her second year playing tennis,” Lake said. “She just joined the team last year, and just started to learn last year.”

Ragland also drew praise for her No. 2 singles and doubles play this season.

“She fought hard with every match, and she was our MVP this season,” Lake said.