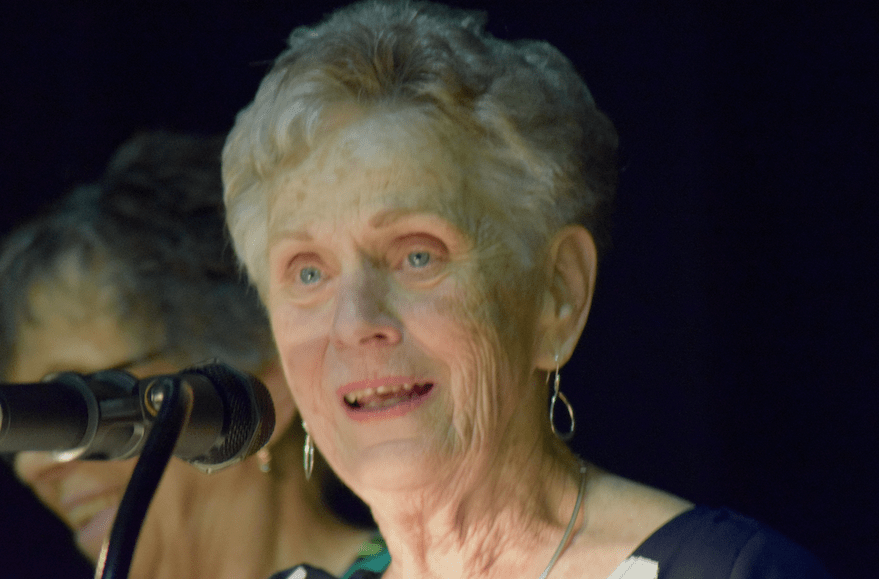 It was a night for new beginnings and old acquaintances. Judges, attorneys, educators, business professionals and elected officials filled Fuqua Lower School Commons Friday evening to celebrate the rebirth of the school’s forensic program and to honor the first inductee of the PEA/Fuqua School Nancy Anderson Haga Forensic Hall of Fame — Nancy Haga.

“Tonight we are here to celebrate the reestablishment of Fuqua’s Debate and Forensics Team and to recognize Nancy Anderson Haga who worked in education for 43 years,” retired Longwood professor and Fuqua debate coach Dr. Robert Frank said. “Some think of her as Mrs. Anderson, some know her as Dr. Haga — but we all know not to cross her!”

Many in the audience remembered Mrs. Anderson from their own school days. 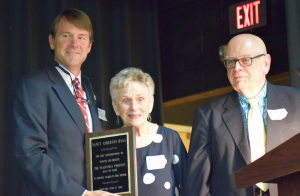 “Mrs. Anderson taught me in the eighth grade — hardest class I had in high school,” Frank said. “We had to learn every bone and every organ in the body. She made her expectations known, and we knew we had to meet them.”

A graduate of Waynesboro High School and the University of Richmond where she was homecoming queen, Nancy Day Anderson came to Prince Edward Academy (now Fuqua School) in 1960-61.

“Anyone who’s spent time with Nancy has a story to tell, and tonight we’re going to hear some of them,” Frank said.

“I have been blessed to be a circuit court judge,” Chief Judge of the 10th Judicial Circuit of Virginia The Honorable Leslie Osborn said. “I would not be anything without Nancy. I was in the eighth grade and all of about 3-1/2 feet tall. The first thing I learned from Nancy was to debate. I did what Nancy told me and studied for a cross-examination debate.” 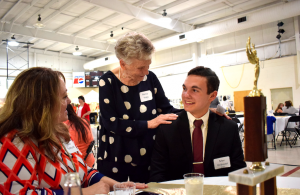 After defeating the co-captain of the football team in the debate, and impressing a young lady who was his partner, Osborn decided he’d found his niche.

“I decided I wanted to be a lawyer,” he said. “Nancy helped me get into the University of Richmond and then into law school.”

Virginia General Assembly Delegate Monty Mason described another of Nancy’s well-known skills — pushing others out of their comfort zones.

“I learned from her that you can do so much more as a human being,” Mason said. “Nancy has spent her life filling those holes you didn’t even know existed — and she does it every single day. It’s fitting that we name this Hall of Fame for her. I would never be a member of the General Assembly if it weren’t for the foundation she gave me.” 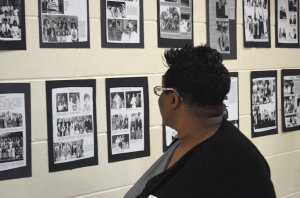 “What Nancy taught follows you in life,” The Honorable Donald Blessing, also of the 10th Judicial Circuit of Virginia, said. “She was the biggest builder of confidence for us, plus our biggest cheerleader.”

While Nancy’s forte was debate, she often used it as a platform to teach other life lessons.

Postal carrier Roger Carson shared his memories of the 1970s.

“She was always giving me little jobs to do,” Carson said. “She was an encourager and motivator — she instilled confidence. She gave each member of our class a trophy for something we’d done — I still have mine.”

“The true measure of Nancy Anderson Haga was that she believed in us when we often didn’t believe in ourselves,” Frank said. “That allowed us to become successful in competitions, careers and in life.”

“Nancy’s love for debate is deep,” Frank said. “She coached at PEA from 1965-87 — the final years she came on her lunch hour from Longwood to coach the team. Her students won awards at local and national tournaments, and I have a strong feeling she often used her own money to help students attend tournaments.”

Nancy’s competitive spirit came to life again recently when asked to judge a forensics tournament. Frank related that one of Fuqua’s Chinese students failed to understand the instructions and came to the competition in blue jeans and sneakers.

“I went to register the team, and when I came back there was Nancy exchanging clothes with the Chinese student,” Frank said. “It was the same in eighth grade — by example she showed us what a teacher should do.”

In the closing remarks of the evening, Nancy described how a high school teacher encouraged her to participate in forensics and debate.

“I was a junior at Waynesboro High School and had lost an election for president of the student government,” she said. “I was heartbroken, but then a teacher approached me to help set up a forensics and debate program. Losing an election led me to forensics that became my lifelong occupation — and brings us to this celebration tonight. When God closes a door on your dreams, he always opens a window.”

Fuqua’s newly-reinstated Debate and Forensics program is a case in point. The door has been opened, and with Nancy Anderson Haga at the window, success is more that assured — it’s undebatable.