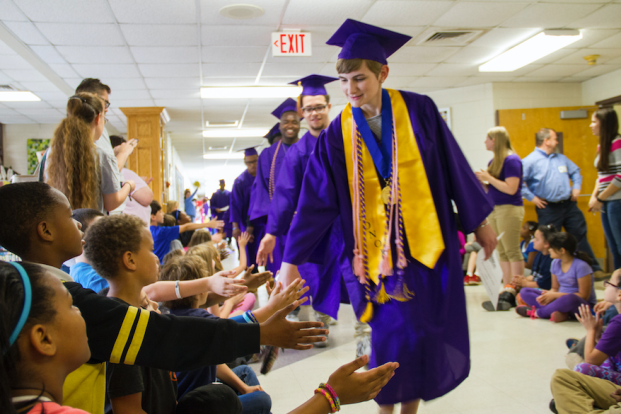 The hallways of Prince Edward County Elementary School were lined with young students holding signs, proud teachers taking photographs and parents cheering on their graduates as seniors walked through the halls wearing their caps and gowns. The event built excitement for the high school graduation, held on Saturday. 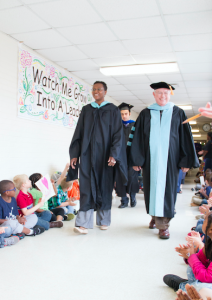 The event, planned by Heather Lettner-Rust, an associate professor of English at Longwood University, was inspired by a similar senior walk in Texas at Van High School. Lettner-Rust read about the Van High School senior walk and helped start the tradition in Prince Edward County by contacting the principals of each school.

“I gathered eight parents for the halls, put Dave Magill in charge since I wasn’t going to be in town, and most importantly, asked several key seniors to spread the word by social media after I got the OK from the high school,” said Lettner-Rust.

According to Lettner-Rust, Rachel Overstreet, the senior class’ adviser, asked the seniors to bring their caps and gowns, and the seniors complied.

According to Magill, approximately 75 percent of this year’s 154 seniors participated in the event.

Dr. David Smith, superintendent of Prince Edward County Schools, Kerestely and Jones helped to lead the seniors as they made the approximately 15-minute loop through the halls of the school.

“I think it’s really important for all the elementary school students to see all the graduates at the end of their K-12 school career,” said Smith. “I think it’s marvelous for the seniors to do this because it sends a powerful message to the young children.”

“I agree,” said Jones. “It continues to encourage the elementary school students that this is what is going to happen at the end of their K-12 career, with hard work and dedication.”

Many hope to see the tradition continue in following years.