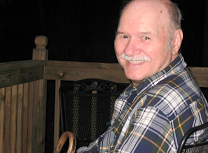 William Earl Kimbrough passed peacefully from this life on May 14, 2016 at his home in Pamplin where he lived with his wife of 51 years, Sherry Kimbrough. He was 75 years old. Known as Bill to his family and friends, he was a family man who was devoted to his wife, son, daughter-in-law and grandchildren.

He was actively involved with his church, Heritage Baptist, where he served as a deacon. He was also involved for many years with the senior bowling league, and his favorite past-times were fishing with his son, Chris, enjoying his family and growing a garden every year, often sharing the produce with his neighbors.

Bill served in the Army from 1961 to 1964 earning the rank of E5 before his discharge. Sherry met Bill in Richmond shortly after he left the Army, and they were they married on August 8, 1965 at Elkhardt Baptist Church in Chesterfield. Bill worked for DuPont for 25 years and for the Virginia Department of corrections for 10 years.

He is survived by his wife, Sherry; son, Chris; daughter-in-law, Alice; grandchildren, Luke, Megan, and Raymond; and sister, Priscella. He is preceded in death by his mother, Gladys, father, James Paul, brothers David and Earnest, and his sisters Florence and Geneva.

A memorial service will be held on Friday, May 20 at 7 p.m. at Heritage Baptist Church, 800 Millwood Rd. Farmville. Family will receive friends at the church just prior to service.

The family requests that donations be made to Centra Farmville Hospice, 800 Oak Street, Farmville, VA 23901 or to Heritage Baptist Church.