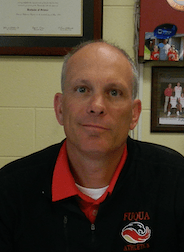 Charles Thomas is nearing the end of his first year as athletic director at Fuqua School, and it has been a smooth ride.

“You hear it at some places, but it’s a family here,” he said. “The Fuqua School, it’s existed and it’s been around because there are some people here who really care about this place and really care about what we can offer kids here, and so those are the people that have just been really nice and welcoming and made it easy for me.”

Thomas has 11 years of experience as an athletic director, most recently serving in the role for four years at Lloyd C. Bird High School in Chesterfield.

“A couple things led me here,” he said. “One was that I thought I was at a time in my life where I needed to slow down.”

“I have two sons, one in sixth grade and one in 10th grade, who I just didn’t see a lot,” he said. “By the time I got home from working games, something to spend some more time with my family.”

He also had a desire to return to a former experience.

“I started at a small private school when I first started coaching in 1989, and so you kind of come full circle, I guess, and so I kind of wanted to finish that way, if that makes sense,” he said. “When you’re at a (Group) 5A high school, you don’t get to know the kids at all when you’re the activities or athletic director. You’ve got so many things going on.”

Group 5A is the next to largest classification for public schools in the Virginia High School League. L.C. Bird had 1,860 students, Thomas said.

He noted that the number of students in the middle and upper schools combined at Fuqua is around 230.

“This is refreshing to me to see kids and know them and talk to them, and that’s the way I started, so that’s kind of the way I wanted to end,” he said.

“I was looking for a challenge for a school that I could help grow,” he said.

He noted he has no intention of bringing about quick, sweeping changes at Fuqua but does hope to use the knowledge he has gained in his experience as an athletic director and 27 years as a coach to improve the athletic programs.

A gradual upgrade in facilities is part of the plan.

“You want your programs to have an opportunity to play in the best environment possible,” he said.

In his first year back with a private school, Thomas said the biggest challenge has been scheduling games against schools of similar size and mission. Scheduling is made easier when teams are part of a conference or district.

Fuqua’s girls teams play in the Blue Ridge Conference, but the school’s boys teams do not have a conference.

“To be honest with you, it was easy to put our girls into a conference because there’s not as much recruiting going on with girls,” Thomas said.

Some private school boys team are stacked with a surprising amount of talent and dominate some of their conference competition.

Thomas said he and Fuqua Head of School John Melton are looking for a conference for the school’s boys teams that fits the school.

“We don’t want to just jump into it,” Thomas said. “We want to make sure we really evaluate it and look at it and make a good decision on that.”